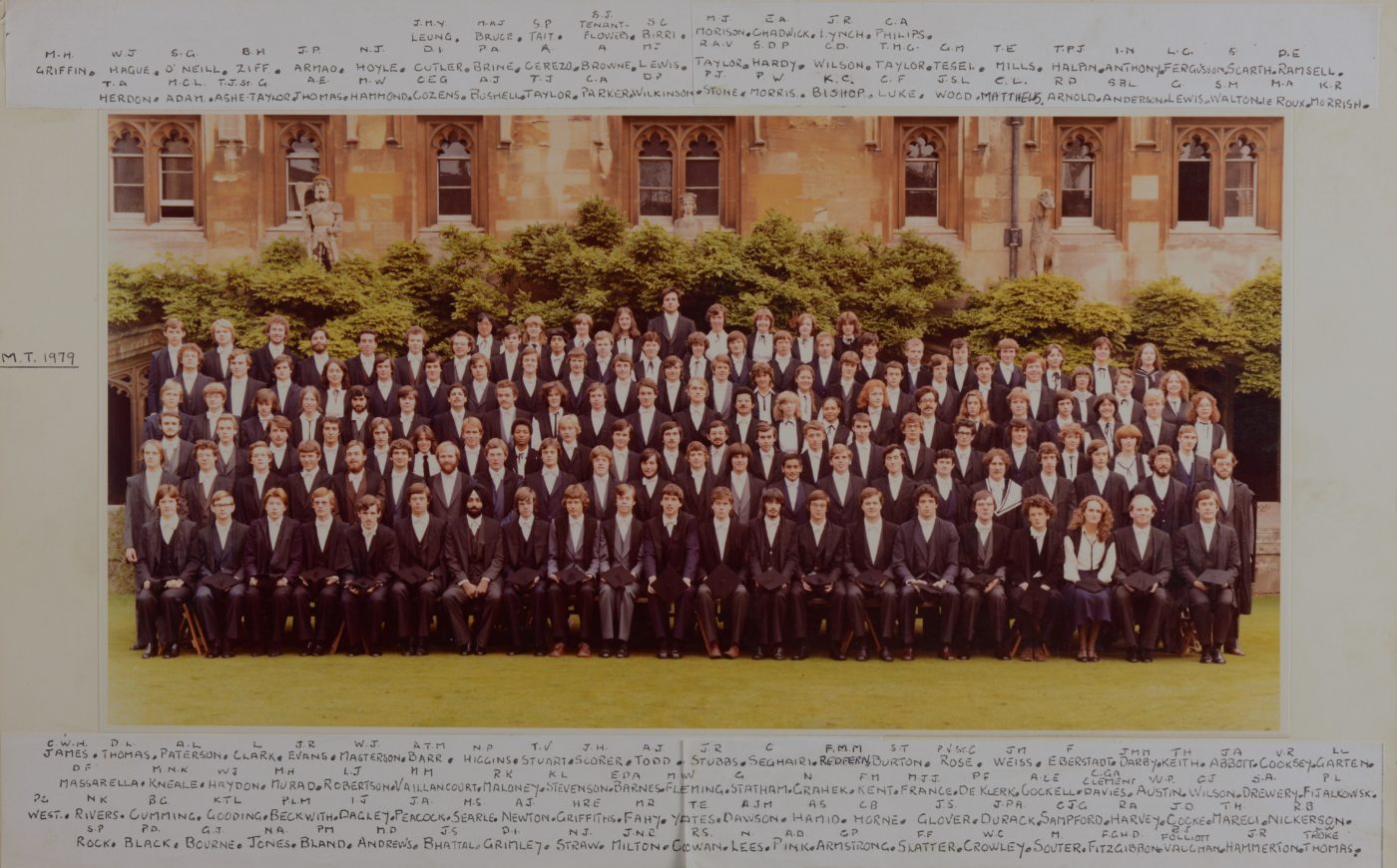 Magdalen was founded in 1458 as a college for men.

When Magdalen fellows revised College’s statutes in 1926, the first statute specified that ‘No woman can be a member of the College’. It was necessary to be explicit in 1926 because the first ‘halls’ for women students had been established in Oxford almost fifty years earlier, as Lady Margaret Hall and Somerville Hall. In 1959, five of these women’s ‘societies’ were granted full collegiate status. This meant that until 1974 Oxford was a university of single-sex colleges. This page explores the politics of co-education within Magdalen, exploring the attitudes and debate that it generated.

To demonstrate the resistance that co-education had to overcome, it is important to recognise just how far attitudes had to change through the 20th century. The pamphlet pictured below argued that Oxford University should continue to award degrees only to men. 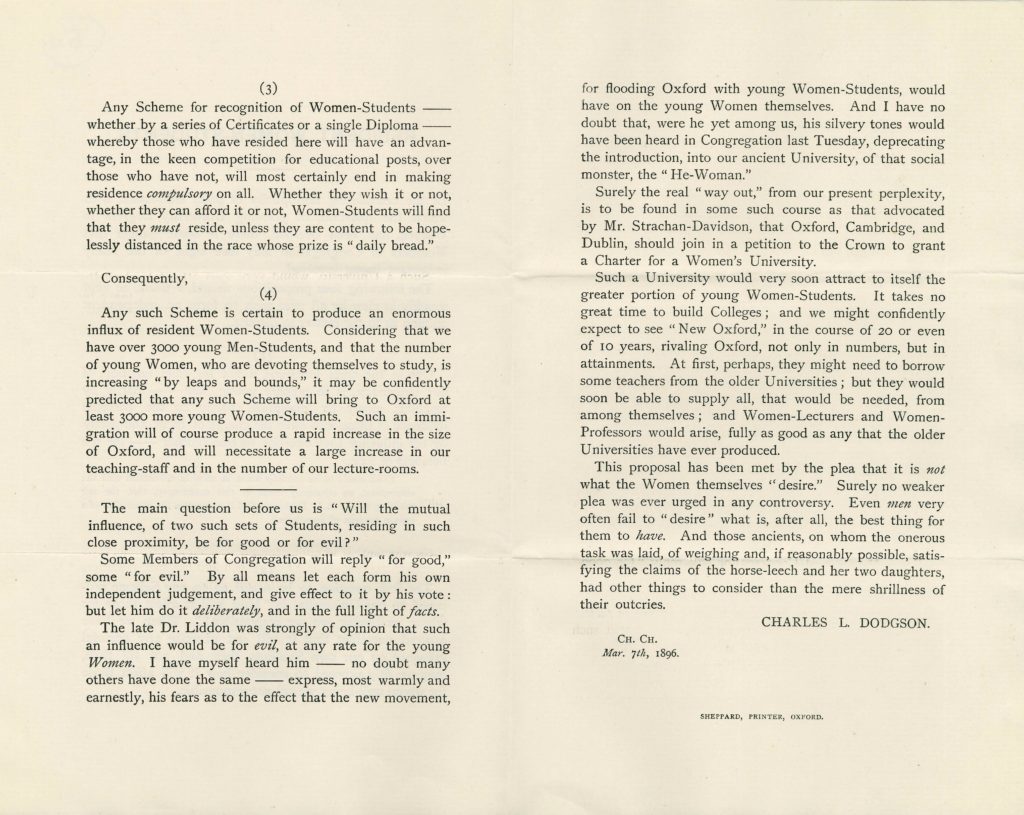 It was written in 1896 by Charles Dodgson who is famous today as Lewis Carroll, the author of Alice’s Adventures in Wonderland. He was contributing to a fierce debate across Oxford University about the purpose of women’s education.

Dodgson argued that a separate ‘Women’s University’ should be established to award degrees to women. This prestigious ‘New Oxford’ would allow the Oxford he loved to continue to ‘prepare young Men… for the business of Life’. Dodgson had previously supported the foundation of Oxford ‘halls’ for women students. He taught female students as a mathematics don at Christ Church.

Many male fellows did not teach women. Magdalen banned women from attending lectures by the College’s fellows. Co-education was thought to be dangerous to men, as well as to women who might become ‘that social monster, the “He-Woman”’. This pamphlet emphasises the strong – and enduring – feeling of many men on the subject.

1968 was a year of radical and student protest across the globe. Calls for ‘women’s liberation’ were a small, but growing, part of progressive demands. One student recalled a tutor telling him that ‘when the revolution comes, which it must, Magdalen College Oxford will be the last place to be affected’.

Global movements for social change did have an impact. Students and fellows at Magdalen began to discuss the admission of women in 1969.

Indeed, it was not until the late 1960s that support for co-education at Magdalen began to gain speed. In 1969, Magdalen students elected a Junior Common Room (JCR) committee that believed that co-education might be a ‘vote winner’ within the male student community. The JCR President, David Kosky, later described the admission of women as a ‘pipe dream’. A referendum in 1969 found that 69 per cent of the 160 students who voted were in favour of co-education. In the gallery below, you can see the paper that students presented to Magdalen’s Governing Body: 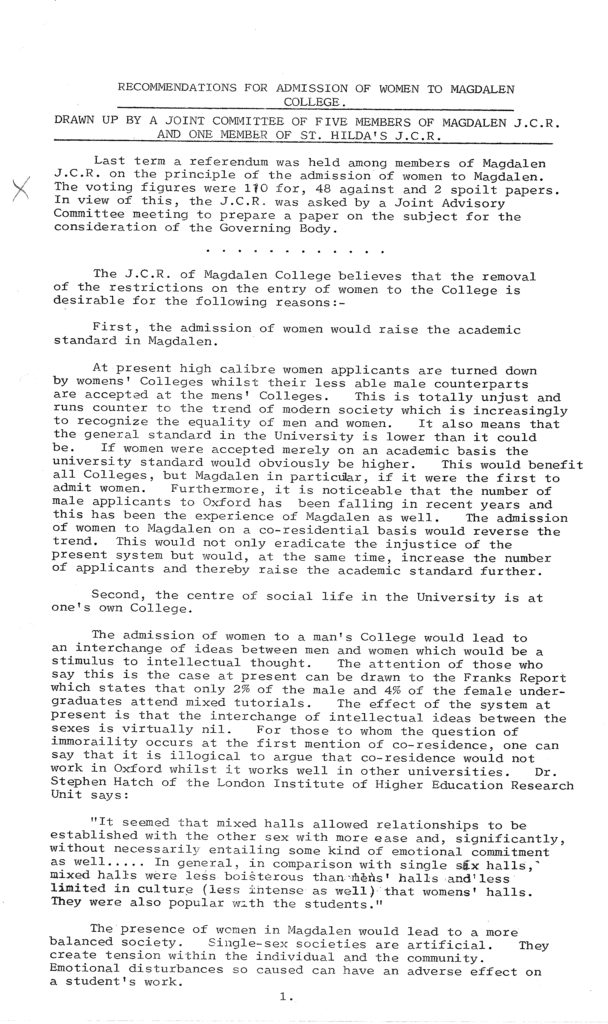 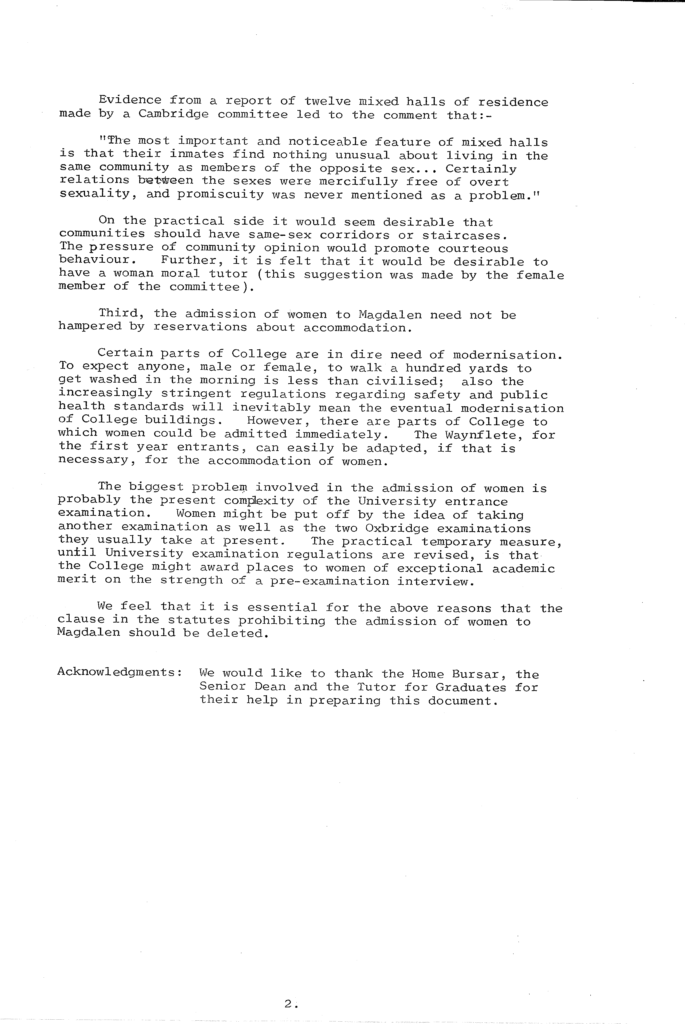 In this paper, they argued that the admission of women would remove an academic ‘injustice’, increase the ‘academic standard’, and create a more ‘balanced society’ within College. They also dismissed concerns about women’s incompatibility with Magdalen’s antique plumbing. 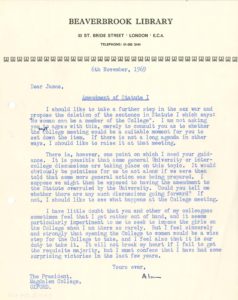 Support for co-education was also by no means limited to the current student body. Famous fellows began to petition the governing body to approve co-education. One such letter can be seen on the right (click to enlarge). This letter was sent to Magdalen’s President by the historian A.J.P. Taylor. As a fellow at Magdalen, Taylor had heard of the JCR’s referendum. He asked College to ‘take a further step in the sex war’ by revising the statutes to permit the admission of women. Two-thirds of Governing Body needed to vote in favour of the change, but in 1970 only 60 per cent supported co-education.

Support for co-education was growing across Oxford University, so the proposal was discussed further by Magdalen’s Governing Body the following year. The 1971 vote was closer, but was lost by a single controversial vote. Complex politics followed, which one fellow recalled as a period when ‘all hell broke loose’. A third vote on co-education was rejected in 1972. 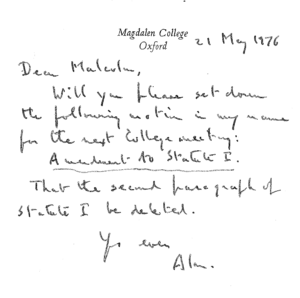 The first women were admitted to five men’s colleges at Oxford in 1974. Supporters of co-education at Magdalen did not give up. Another note written by A.J.P Taylor (pictured right, click to enlarge) prompted Governing Body’s fourth vote on the admission of women on 16 June 1976. The motion passed with the support of 71 per cent of the fellows present. In 1977, the University permitted a second cohort of men’s colleges to become co-educational. As a result, women were admitted to Magdalen from Michaelmas (autumn term) 1979.

Once Magdalen’s Governing Body voted to admit women in 1976, students and fellows tried to imagine how women would transform Magdalen’s buildings, culture, or norms when they joined College in 1979. Some viewed the prospect of ‘Changed priorities ahead’ with dread.

Many men supported the admission of female students on principle. They wanted their daughters and sisters to benefit from the education that men enjoyed. Others hoped that the ‘revolutionary step forward’ would allow other long-desired changes to follow in the footsteps of women.

Perhaps the best record of co-education is one of the simplest. Below, you can see the photograph taken of matriculating students at Magdalen in Michaelmas Term 1979: 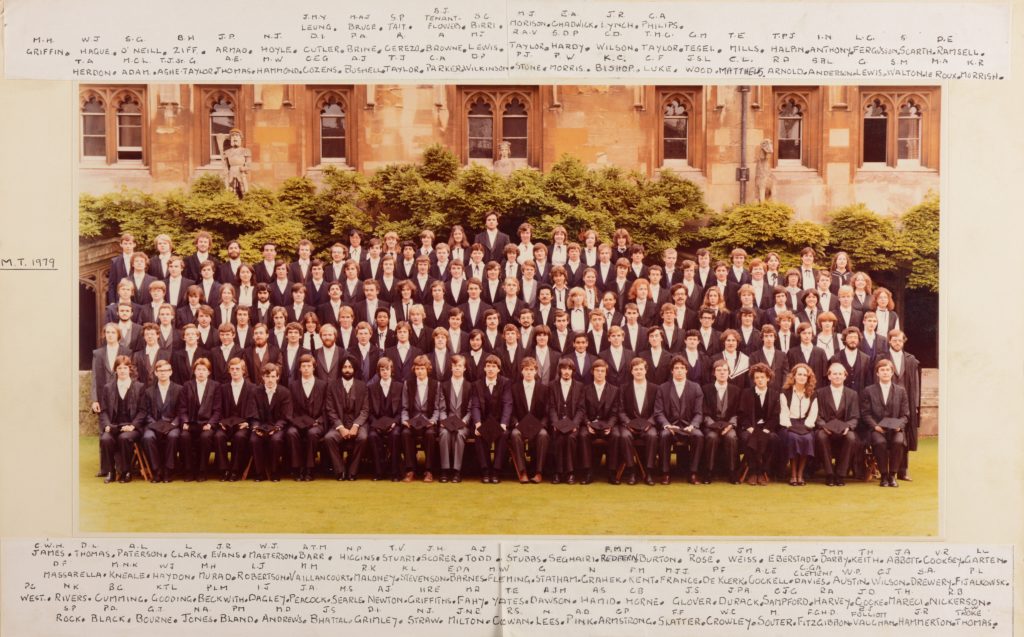 The 32 women pictured here were the first female students to be admitted to Magdalen. They made up about 20 per cent of the year-group, but this percentage would only increase in subsequent years. This photograph serves as the legacy for all those that campaigned and fought to make co-education at Magdalen a reality. On the next page, we will explore the impact that these female students and their successors would have on the college after 1979.

Magdalen Men and ‘Their’ Women