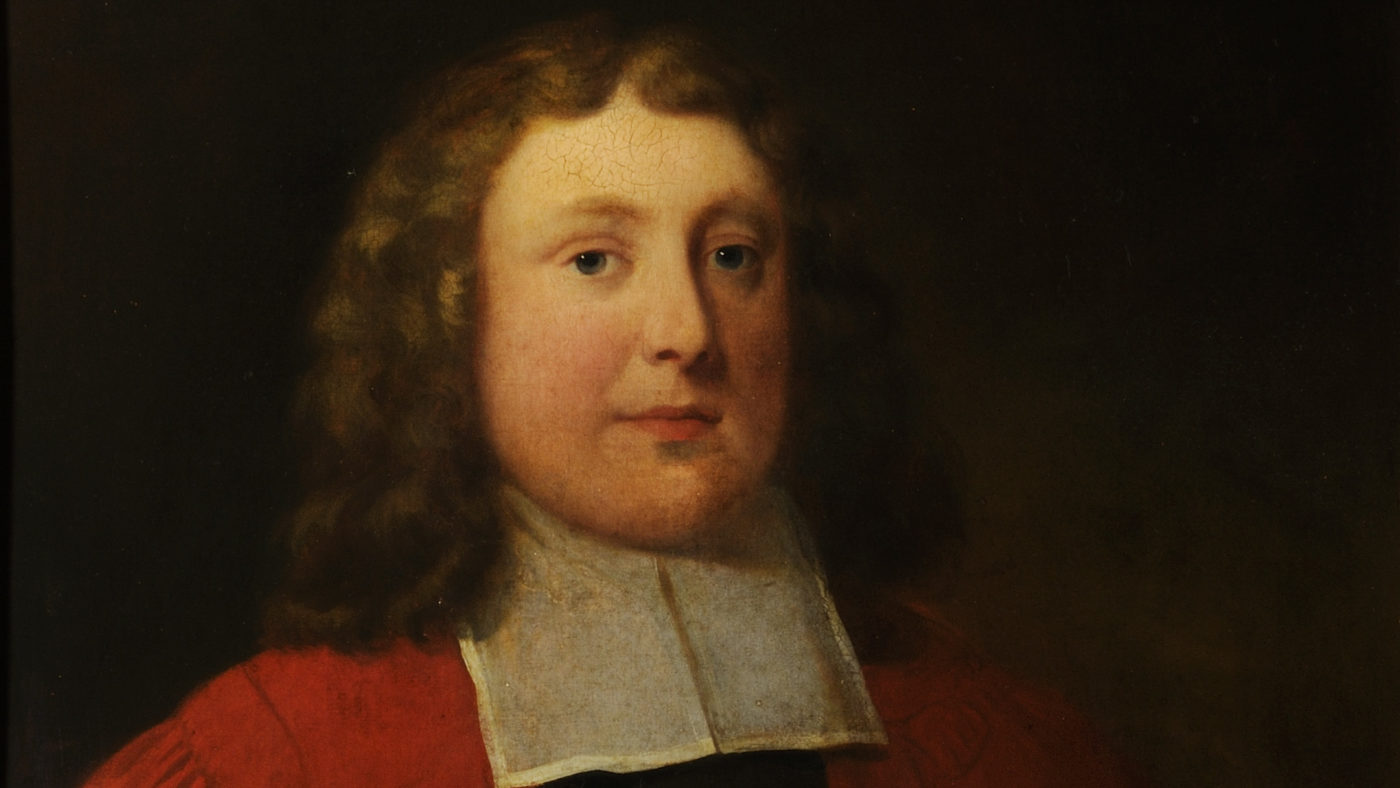 Magdalen men and 'their' Women

With the exception of the College’s President who could marry and live with his family on site, all fellows and students were required to remain celibate. If they wished to marry, they had to resign their post until new statutes in 1880 permitted certain fellows to retain their posts if married. By the 1920s, most fellows were married.

The 15th century statutes also dictated that students and fellows were ‘to keep away altogether from suspicious companies… [and] disreputable or suspicious communications’ and permission was needed to spend the night away from college or to leave Oxford. Similarly, the statutes list the ‘greater Crimes’ of heresy, simony, perjury, theft, homicide, adultery/fornication, incest, and battery which would lead to immediate expulsion from College without the right to appeal.

Drastic action would be taken by the President, Vice President, two Deans, and the Bursars in order to avoid ‘scandal, loss or prejudice’ to the College’s name. Preserving the institution’s moral standing and good name was all important.

In reality, the lines between acceptable and unacceptable behaviour were blurry. As we shall see below, the strictness of the College’s current statutes varied over time, depending on the views of the President and fellowship as a whole. Some of the Magdalen community toed the line willingly; others sought the pleasures of female company outside the walls and were willing to take the consequences!

From the earliest years of College life, accusations of adultery and misdemeanours were made by fellows against one another. This was particularly common in times of turmoil and disagreement within the fellowship. 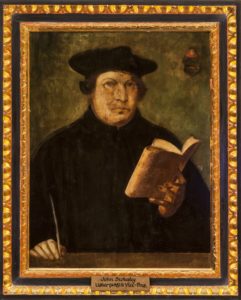 Magdalen President Richard Mayhew came into post in 1480 but was appointed Bishop of Hereford in 1504. He was often away attending to his duties elsewhere and the College fell into disorder and disrepute in his absence. The College’s ‘Visitor’ Bishop Richard Fox was called on to investigate what was happening. Fox sent a representative to Magdalen to conduct a thorough inspection which delved into all aspects of College life. Below, you can see a detailed account of the 1506/7 visitation. The account reveals that Vice President John Stokysley (1475-1539) (pictured right, click to enlarge) found himself accused of committing adultery with the (unnamed) wife of an Oxford tailor. Click in the gallery below to read more: 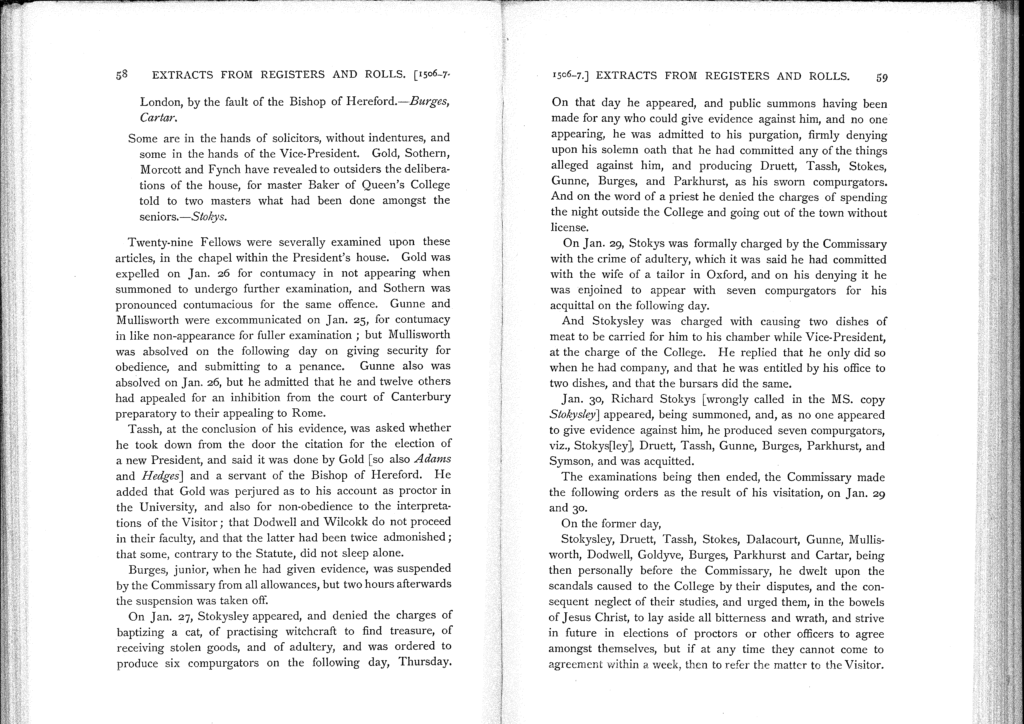 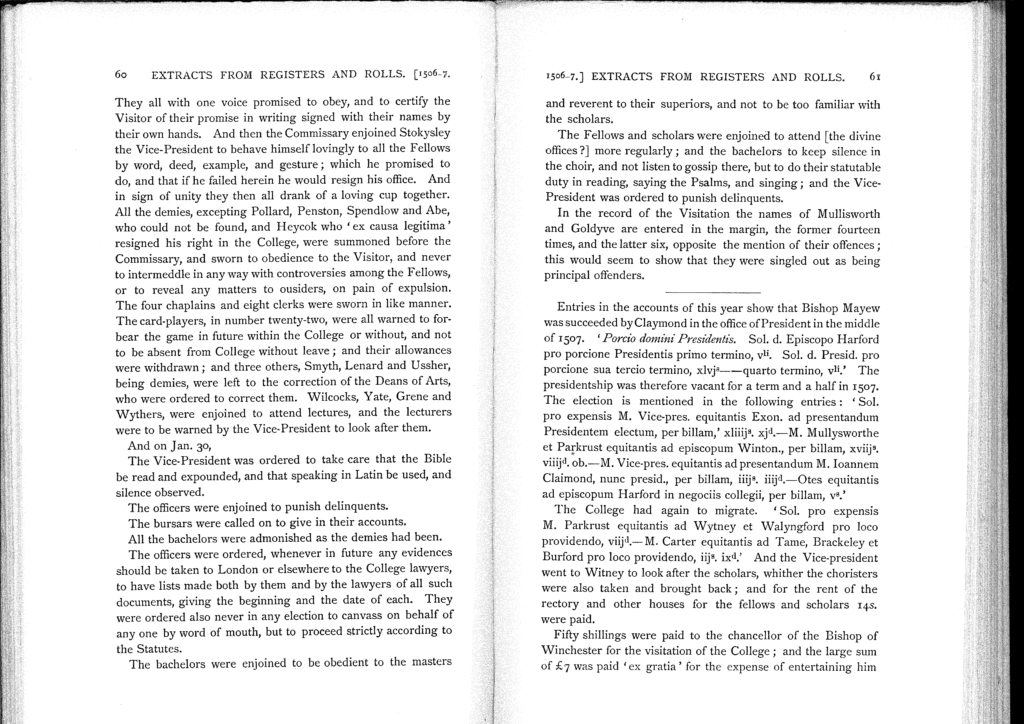 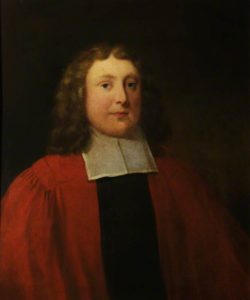 Other charges against him included baptising a cat, practising witchcraft to find treasure, and receiving stolen goods. He was rapidly cleared of all charges and President Mayhew himself resigned in 1507. Stokysley acted as President prior to the arrival of John Claymond in that role in c 1510. Later in life, Stokysley became a chaplain to Henry VIII, an ambassador to France and Italy, and eventually the Bishop of London.

In later centuries, the College often had to act swiftly to avoid scandal when it became clear that a forbidden sexual liaison had taken place. In January 1685, a College porter Vaughan Major made the organist’s daughter pregnant with ‘a great belly’. President Henry Clerke (pictured right, click to enlarge) and the fellows duly gathered in Hall to discuss this misdemeanour.

The College’s organist Dr Benjamin Rogers was a distinguished musician and composer who wrote the ‘Hymnus Eucharisticus’ now sung on the Great Tower every May Morning by the Magdalen choir. When the scandal broke out, Rogers was deemed responsible for the ‘keeping of his daughter in his lodgings’ and for permitting his ‘scandalous creature’ of a daughter to behave as a reputed ‘common whore’. He was also accused of deficiencies in his duties as organist, as well as ‘bringing the devil into his lodgings and giving out that they were haunted with evil spirits’.

Rogers was duly removed from office and pensioned off for £30 per annum. He died in 1698 at the age of 84. The porter was dismissed. The fate of Rogers’ daughter was not recorded, nor was she named in any of the surviving archive sources including the President’s official Notebook. Read the account in the gallery below, or see the transcript: 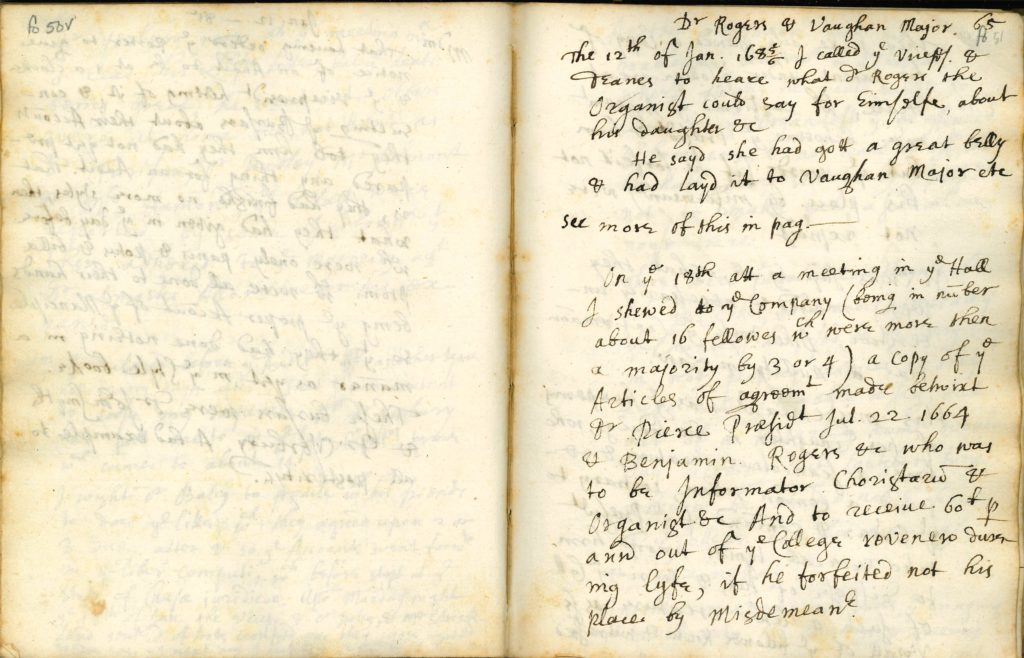 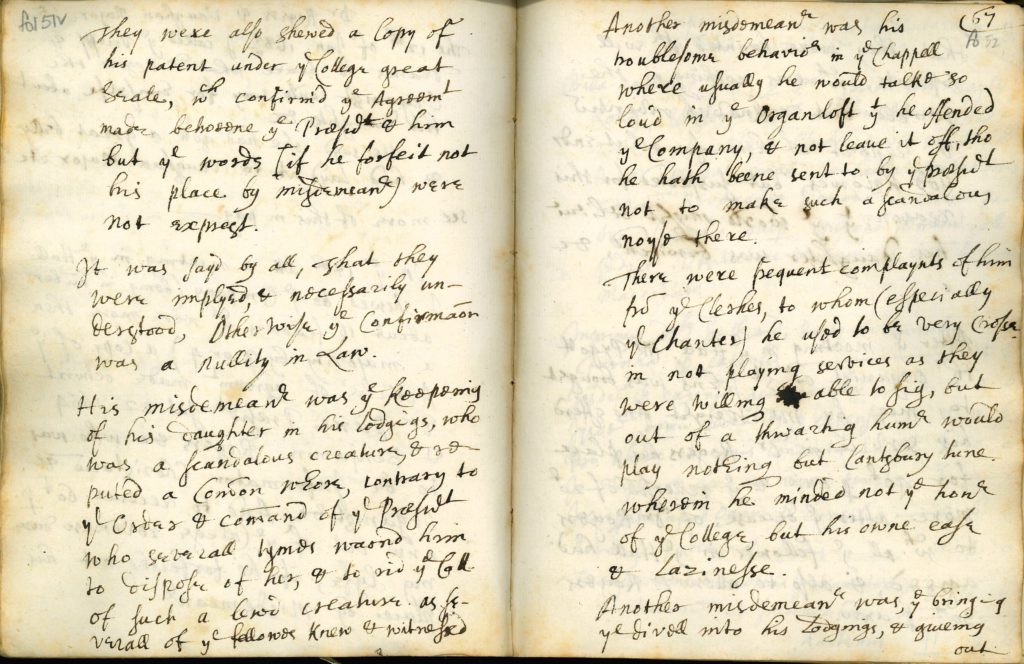 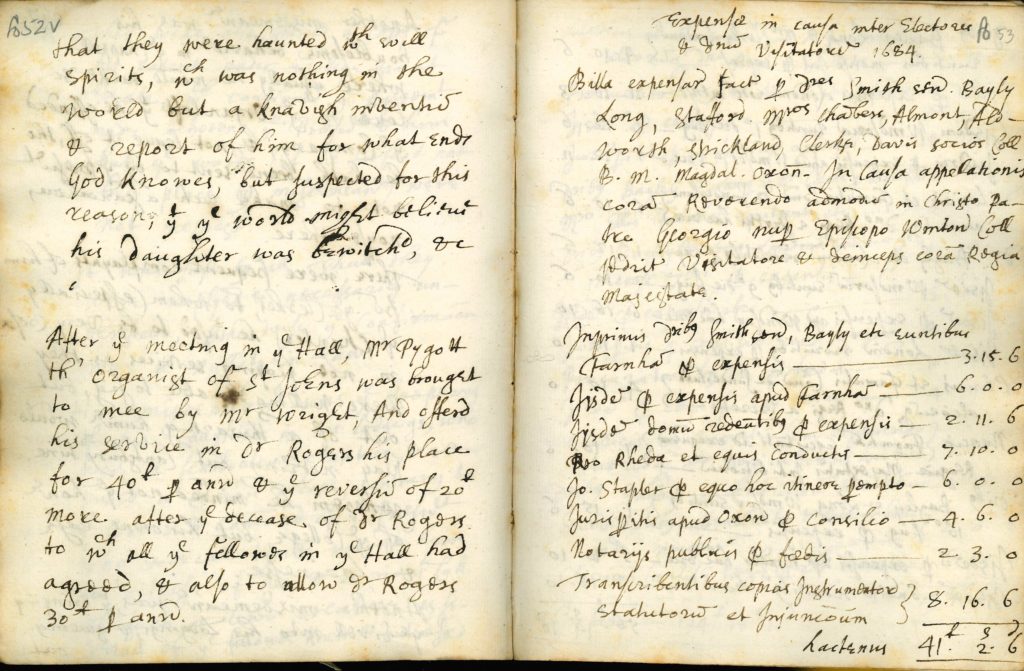 Many years later, James Hurdis was the University’s Professor of Poetry (elected in 1793). He was a devoted family man as well as a dedicated scholar, spending all his vacations with his mother and instructing his four sisters prior to his marriage, and later moving two of the latter to Oxford. In 1799, he wrote to President Routh to announce his forthcoming marriage. You can read Hurdis’ full letter to the President below (click to enlarge and see the transcript): 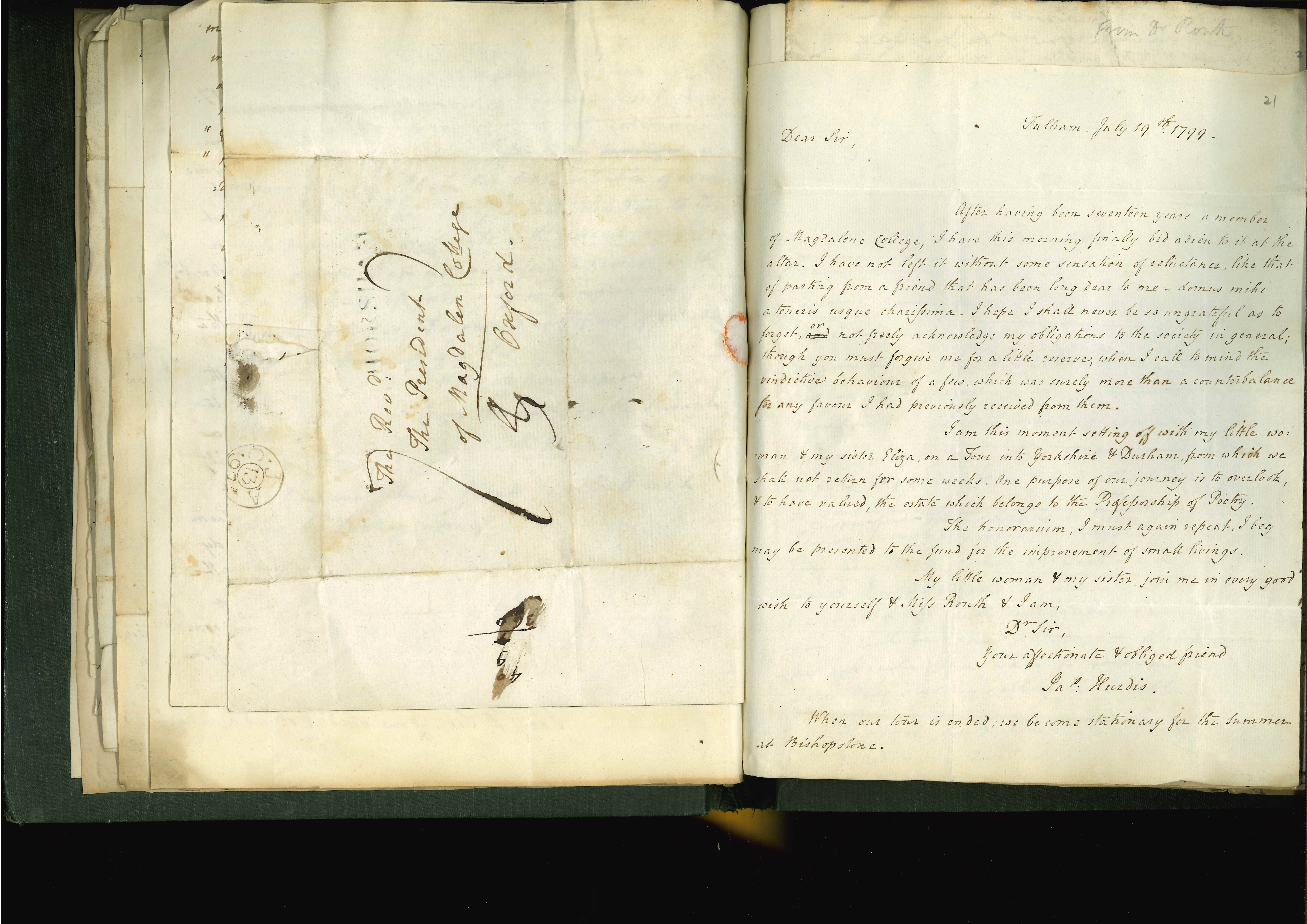 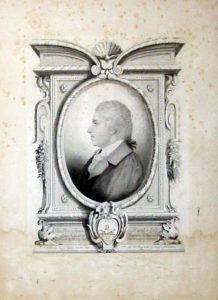 Hurdis had been a member of Magdalen for 17 years as student and fellow and was reluctant to leave his peers on marrying, although he also looked forward to his honeymoon into Yorkshire and Durham with his bride and ‘little woman’ Harriet Minet and his sister Eliza. Sadly Hurdis was not a married man for long, dying at the age of 37 in December 1801 after a sudden illness. His widow Harriet was left to manage a complex relationship with the Hurdis sisters, as she had to go to court to establish the validity of Hurdis’ will which would support her in later life.

Throughout the College’s long history, relationships between men and women had been strictly controlled, with the male leadership of the college trying to restrict any behaviour deemed ‘illicit’. The year 1979 – when co-education was finally introduced – started to challenge this male leadership. As we will discover on the next page, though, change is often resisted by those in entrenched positions of power…