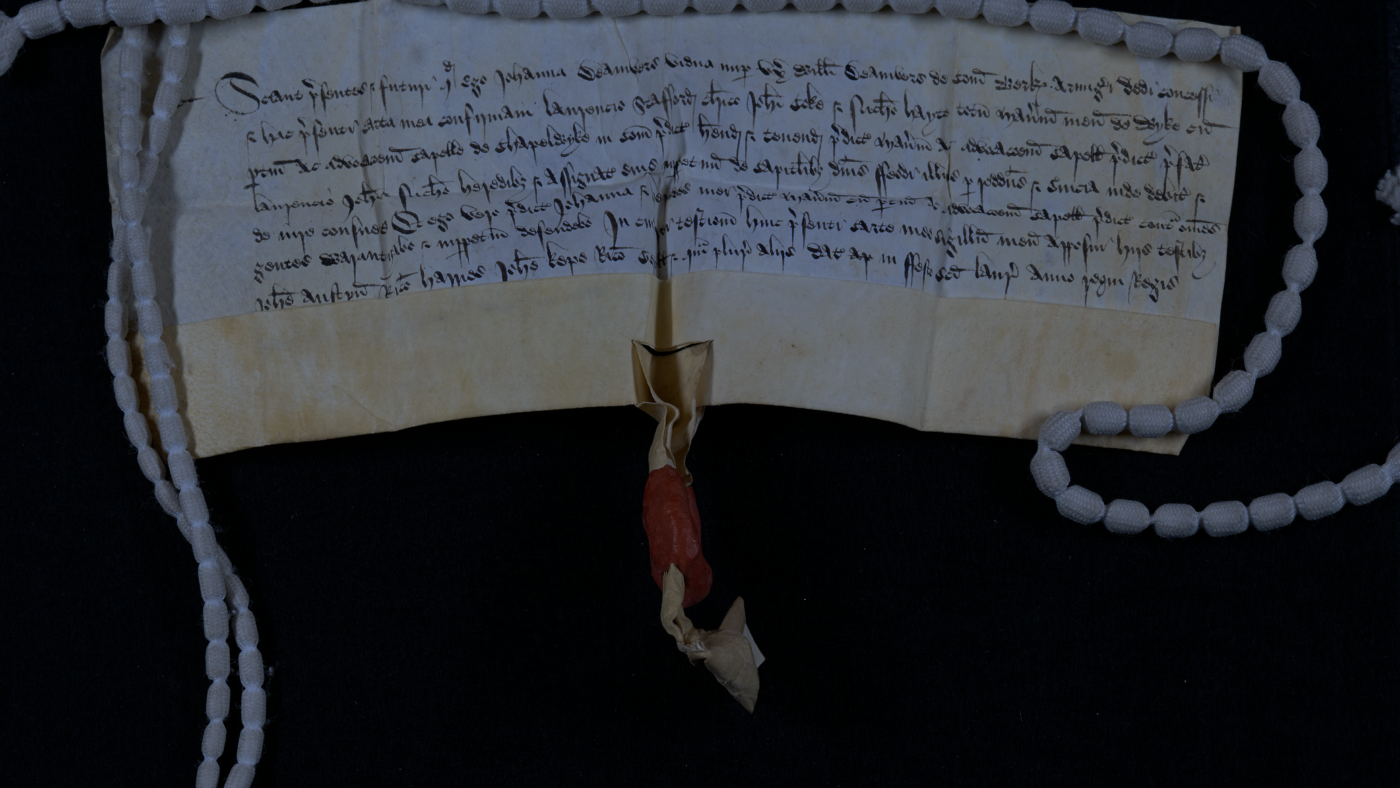 Although not admitted as students until 1979, women played a role in college history right from its foundation in 1458.

After founder William Waynflete established the College, he spent decades acquiring land across 20 English counties until his death in 1486. Such land was acquired to produce rental income that in turn financed the College and its fellows, making it independent for the future.

It was common for wealthy medieval Catholics, male or female, to make gifts to institutions. This arrangement helped to finance a wide range of schools, colleges, and churches which often had a religious focus on education or liturgy. In return, a mass would be held annually to pray for the soul of the deceased person on the anniversary of her/his death.

Thanks to the college archives, we know that there are two medieval women of note who gave lands to College as part of its 15th century origins – Lady Joan Danvers and Lady Alicia Lovell. To commemorate their gifts, masses were held on an annual basis for both women, revealing their status as key medieval Magdalen donors.

Lady Joan (or Joanna) Danvers (d c 1459) gifted a manor called Stainswick in Berkshire to the College in 1452. Joan was the second wife of John Danvers (d c 1449) and came from the Bruley family of Waterstock. The manor was also known by the name of Danvers Wick and had been in her family for some time. She gifted the land to Magdalen following the death of her husband when she inherited his property for her lifetime. She also donated to University and All Souls Colleges in Oxford.

The Danvers were wealthy Oxfordshire gentry, some of whom acted as administrators for various Oxford colleges. One of Lady Danvers’ relations, now identified as her son Thomas Danvers (d 1502), was a lawyer and acted as a land agent for the College’s founder Bishop Waynflete. When this manor passed into College hands, the original title deeds came too as proof of ownership. There are nearly 150 deeds for this particular manor held at Magdalen, covering the early 13th century to the 1590s. In the gallery below, you can look in closer detail at a few of them: 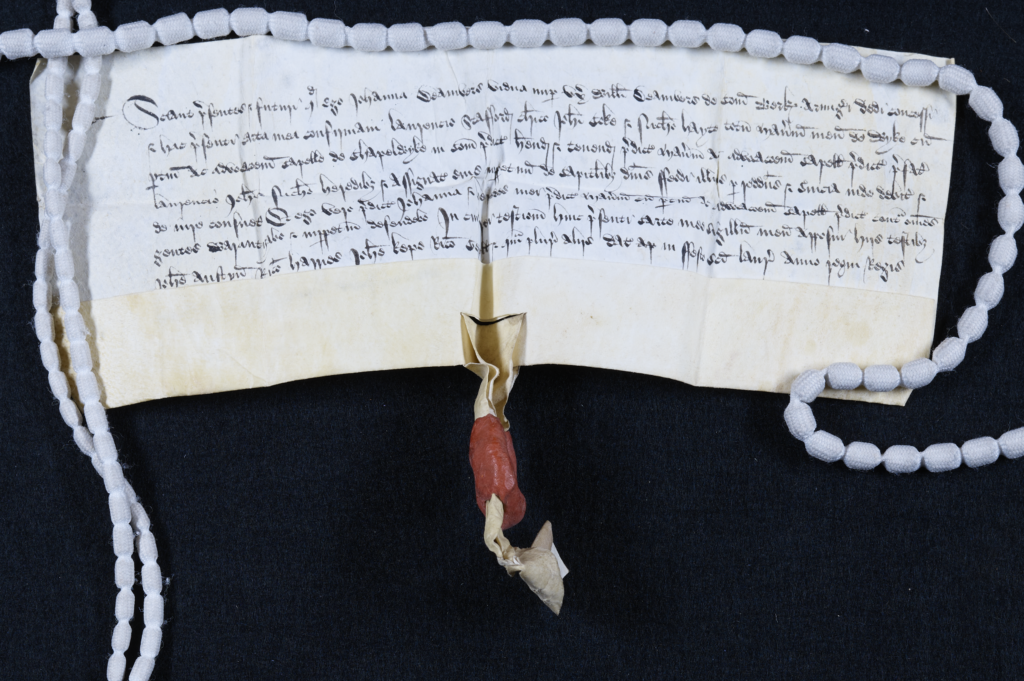 This pile of deeds is just a small selection of the 13,000 deeds held in the Archives for more than 100 other manors across England, including five others from Berkshire. This diversity of landholdings made Magdalen one of the richest Oxford colleges, so today the College is home to one of the richest medieval deed collections in the country.

Recent research has revealed that Lady Alice Lovell (1403/4-1473/4) was the second daughter of Sir John Deincourt (5th Lord Deincourt). Her family was part of the English nobility, with high-level connections to the Despenser, Cromwell, Zouche, Talbot, Neville and Percy families. She married twice, firstly William Lovell (7th Lord Titchmarsh), a Justice of the Peace and Constable of Wallingford Castle, Oxfordshire, and secondly Ralph le Botiler (7th Lord Sudeley) of Sudeley Castle, Gloucestershire. Numerous members of the Lovell family and their complex wider kinship networks are represented within the College’s medieval archives which relate to the College’s land holdings across 20 English counties acquired by Waynflete in the 15th century. In the 1450s, Alice proposed funding two graduate fellowships for theology at Magdalen which would ‘preach and teach the law of God’. It is not certain whether this actually happened, but she did certainly donate some land to the College. 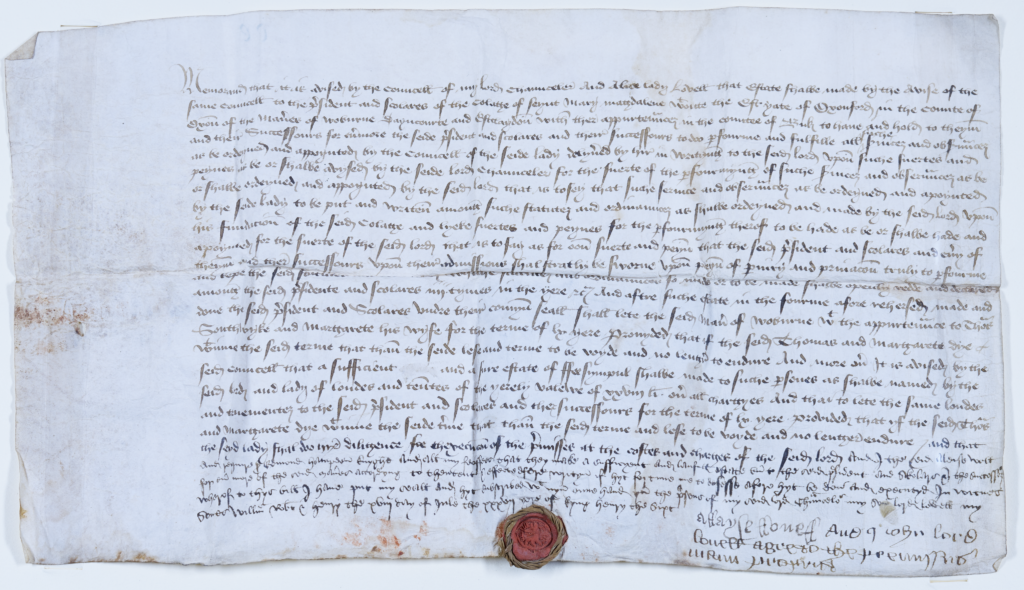 This agreement between Bishop Waynflete and Lady Alice Lovell, dated 18th July 1457, records her gift of three manors in Buckinghamshire to the College. Ultimately it was not honoured, and another manor in Northamptonshire was given to the College instead some twenty years later.

This particular document is unusual as it includes Lovell’s own signature at the bottom, with her name given in the spelling ‘Alayse’ – a signature was not common practice at this time as usually wax seals alone were used. We think that this is probably the earliest female signature in Magdalen’s archive. The seal with a rare straw surround featuring a wolf’s head and inscription is attached.

Alice makes her signature in the presence of the Lord Chancellor (probably Waynflete himself at this date) and her son Lord John Lovell. John was 8th Lord Lovell of Titchmarsh and 5th Lord Holand (1433-1464/5) – he died in his early thirties not that long after witnessing this deed, and his eldest son Francis (later Viscount Lovell) became a ward of Edward IV. Francis then inherited large estates directly from Alice when she died, including the baronies of Deincourt, Grey of Rotherfield and Bedale, making him one of the wealthiest English barons of his time.

After the foundation of the College in the 15th century, women did not feature as donors to the College for much of its later history. During the 17th and early 18th centuries, however, this changed. At this time, the College was raising funds to finance the construction of what later became the New Building, originally planned as part of a new quadrangle. Particularly noteworthy donations were recorded in a dedicated Benefactors’ book, which ran from 1663-1739. The entry for Mary Blow (sister of President Edward Butler) can be seen below: 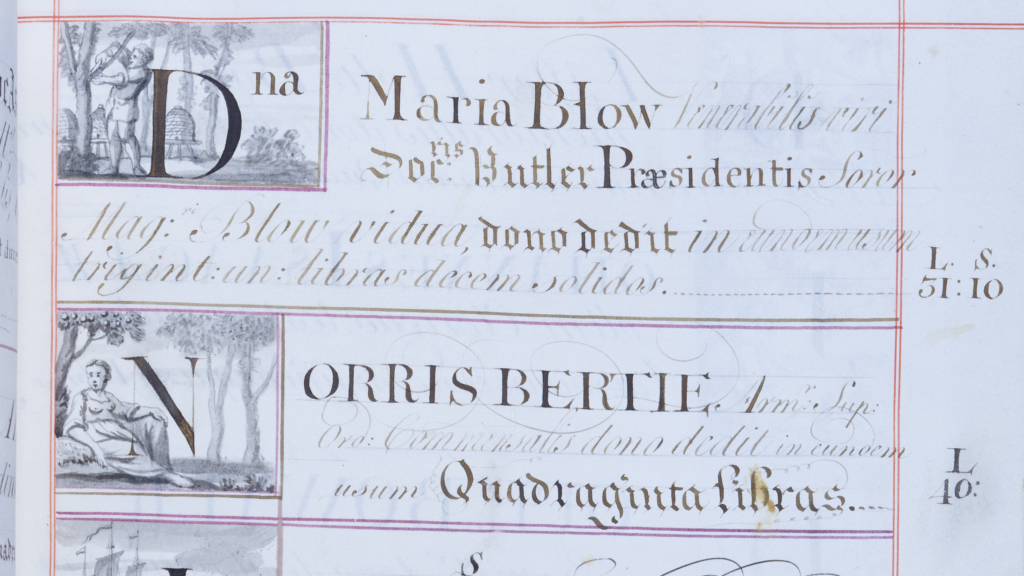 This entry shows that she donated £31.10.0. She is one of very few female subscribers listed in the entire book. One of the New Building’s foundation stones was laid by President Butler’s young daughter Molly in 1783. 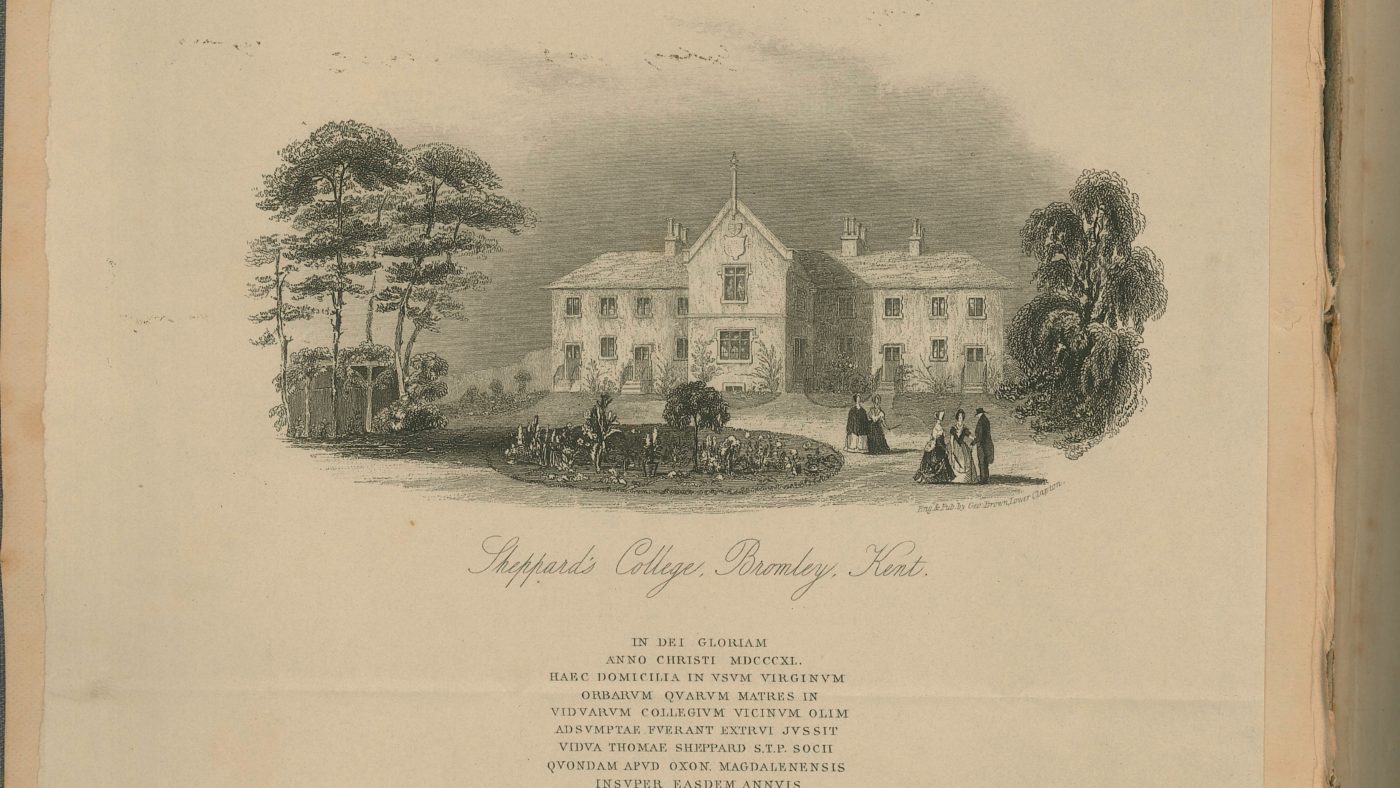 A Fairy Godmother for Magdalen:

Our final female donor to highlight is Sophia Sheppard. Born in 1769, she was an important figure in College. As the youngest sister of President Martin Routh (1755-1854), she lived in the President’s Lodgings until her marriage in 1801 to the wealthy former fellow, Dr Thomas Sheppard. The couple shared philanthropic interests and Sophia actively continued her good deeds following her husband’s death in 1814. These donations centred around religious and medical institutions.

Despite her generosity, surprisingly Sophia remains largely absent in the College’s collections today. Indeed, there is only one surviving letter from her within her brother Routh’s large archive held at Magdalen. In 1810, she wrote to her brother President Routh to inform him that the Bishop of Salisbury had given Routh the right to be Rector. Read the letter in the gallery below and see the transcript: 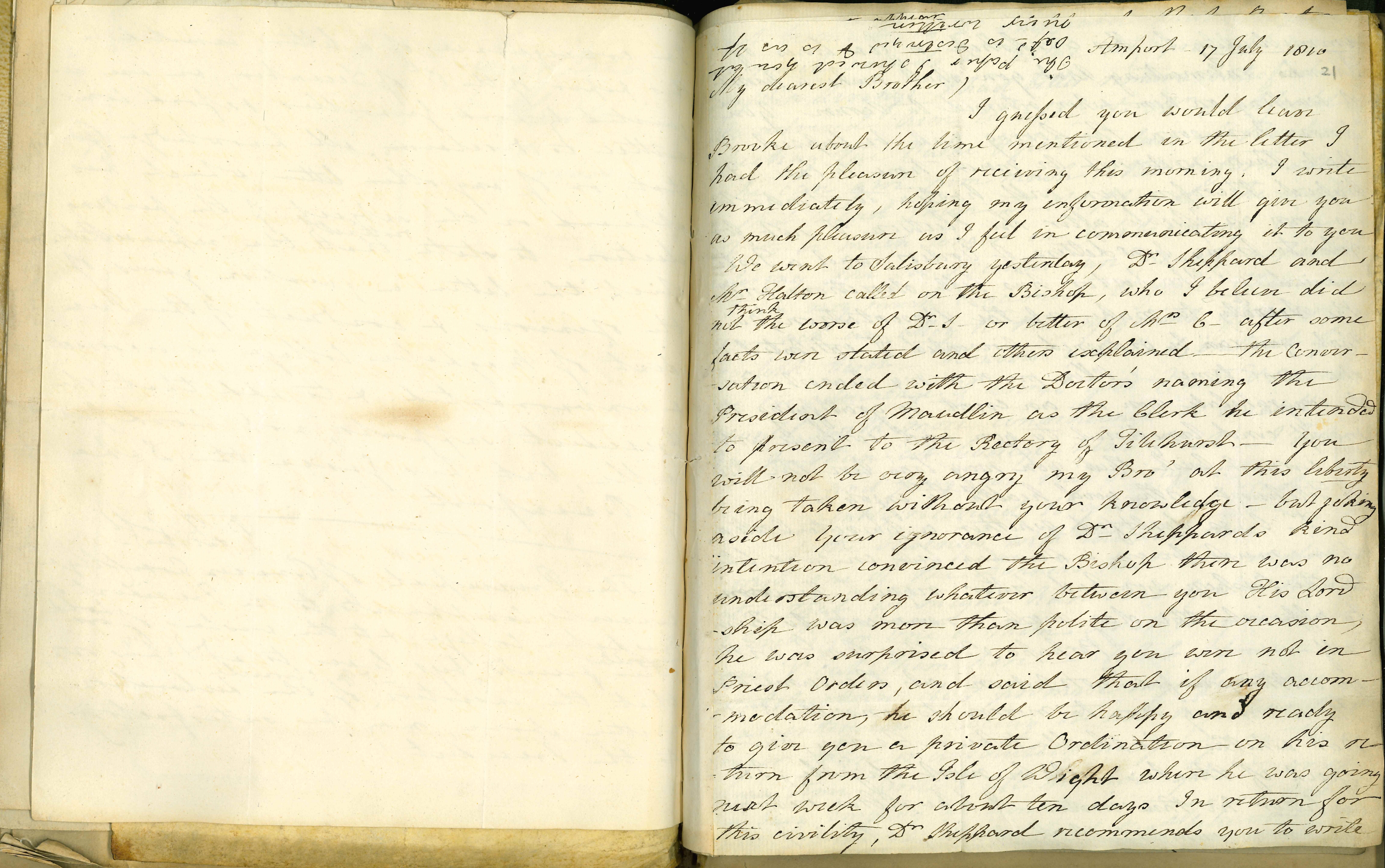 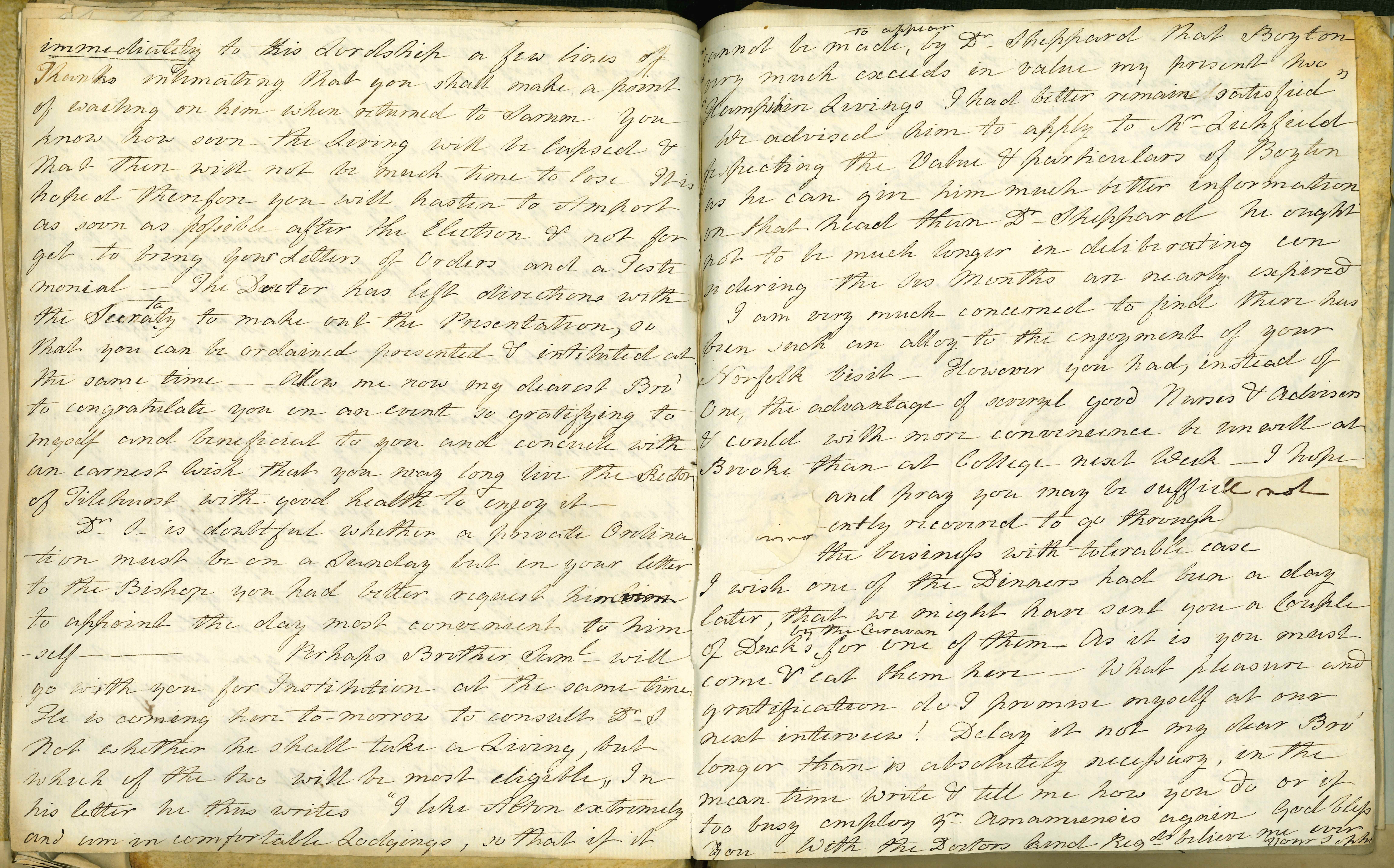 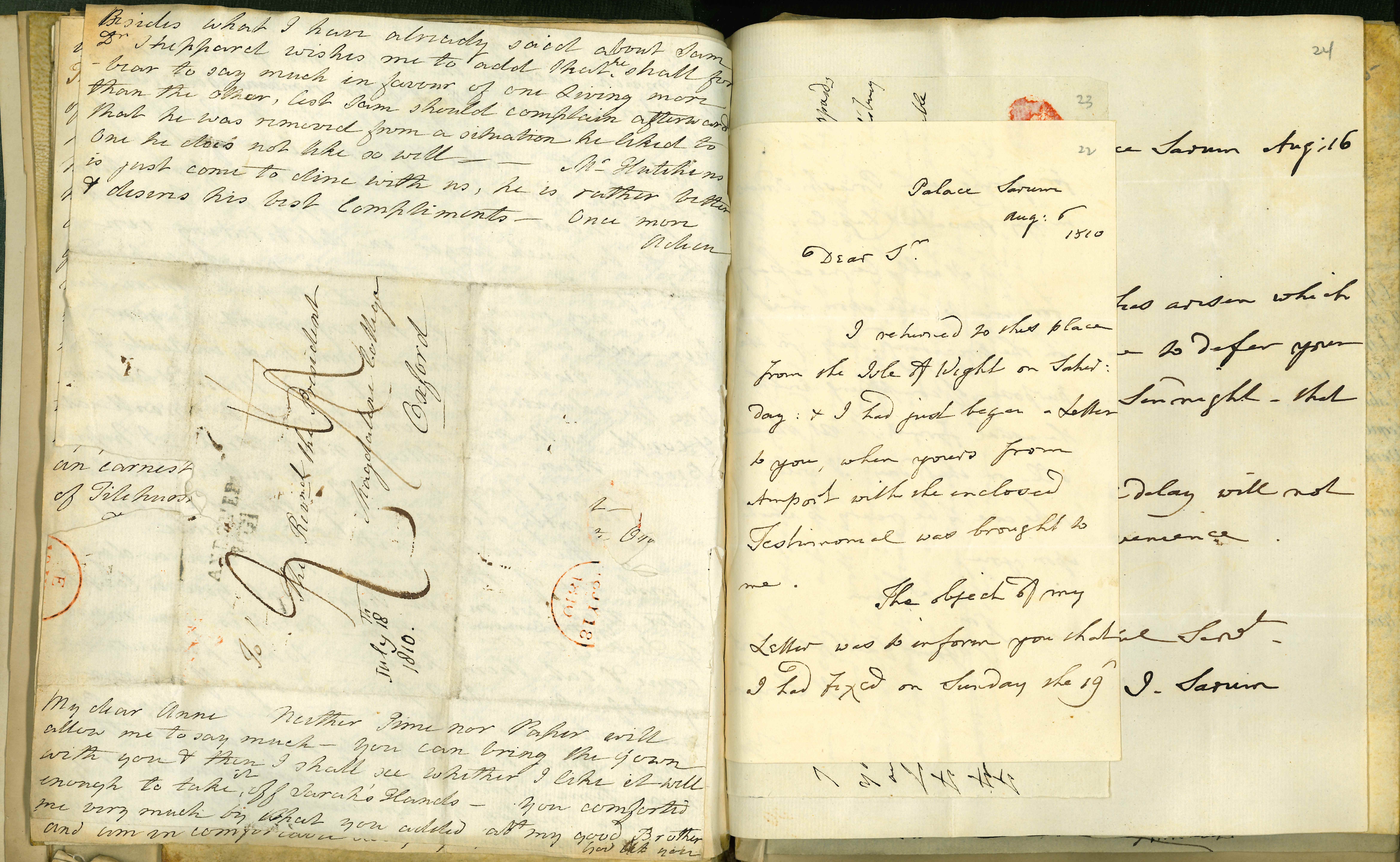 Routh was not a clergyman so he was privately ordained and became Rector in August. In 1820, a private Act of Parliament was passed to enable Sophia Sheppard to start her proposed building project in Tilehurst parish, Berkshire, which was the new chapel for the hamlet of Theale. The estimated building cost was around £7,700 – nearly half a million pounds today. The church was consecrated in 1832. The engraving below shows the exterior view of the building, drawn in 1839 by Oxford artist and architect John Buckler (1770-1851), who was also a Magdalen College employee for many years. 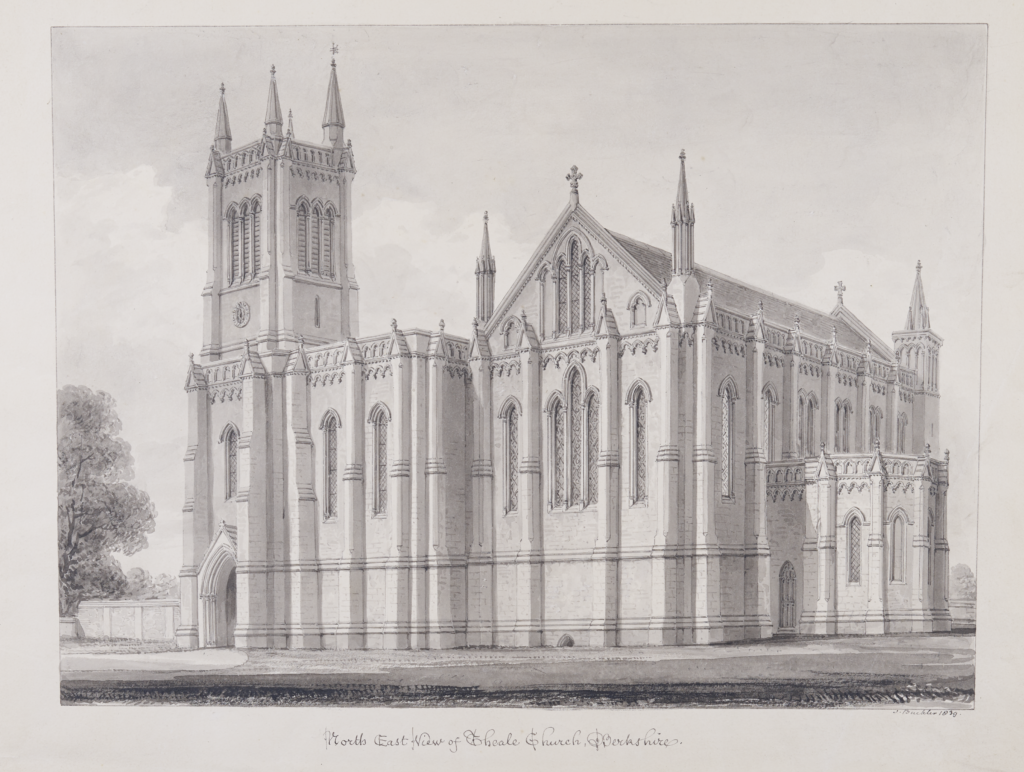 Sophia was not only interested in funding religious buildings, but also in using her money to support both the clergy and their families. In Bromley Hospital, Kent, she used her wealth to aid women in particular. In the grounds of this hospital, she built an almshouse named Sheppard’s College (see picture below). 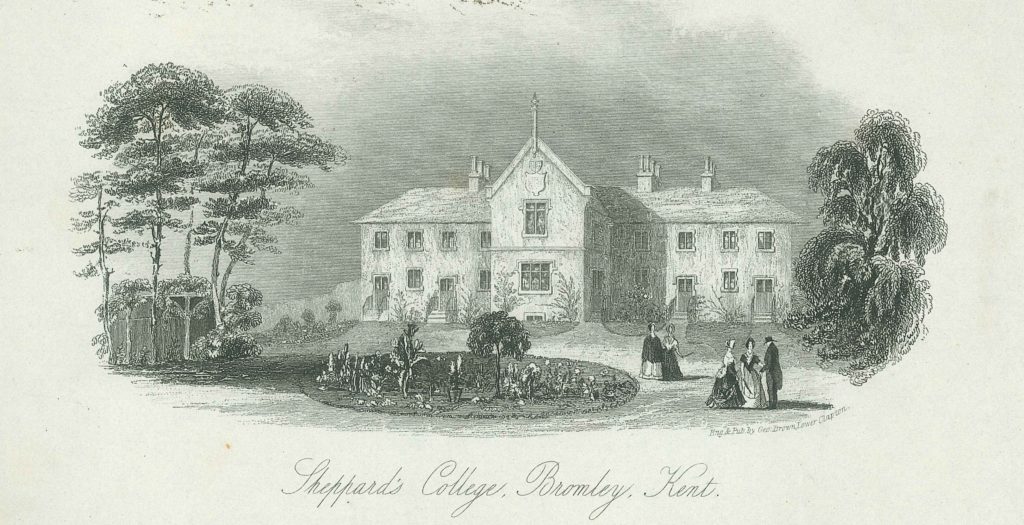 This terrace of five dwellings cost half a million pounds in today’s money, housing daughters of clergy widows who had until then been cast out of the existing hospital when their mothers died. The engraving above shows how Sheppard’s College appeared when first built in 1840. Bromley College survives as a Trust providing sheltered housing for retired Anglican clergy today, with their spouses, widows, widowers, and unmarried daughters. The building remains a testament to Sophia’s enduring generosity.

Sophia’s commitment to improving the lives of women was not limited to religious families. She also set up a regular donation from the Sheppard Fund which contributed towards the medical care of gentlewomen at 90 Harley Street, London. This establishment is still an operational hospital, now specialising in private mental health. The famous British nurse Florence Nightingale (1820-1910) was one of its former Lady Superintendents. 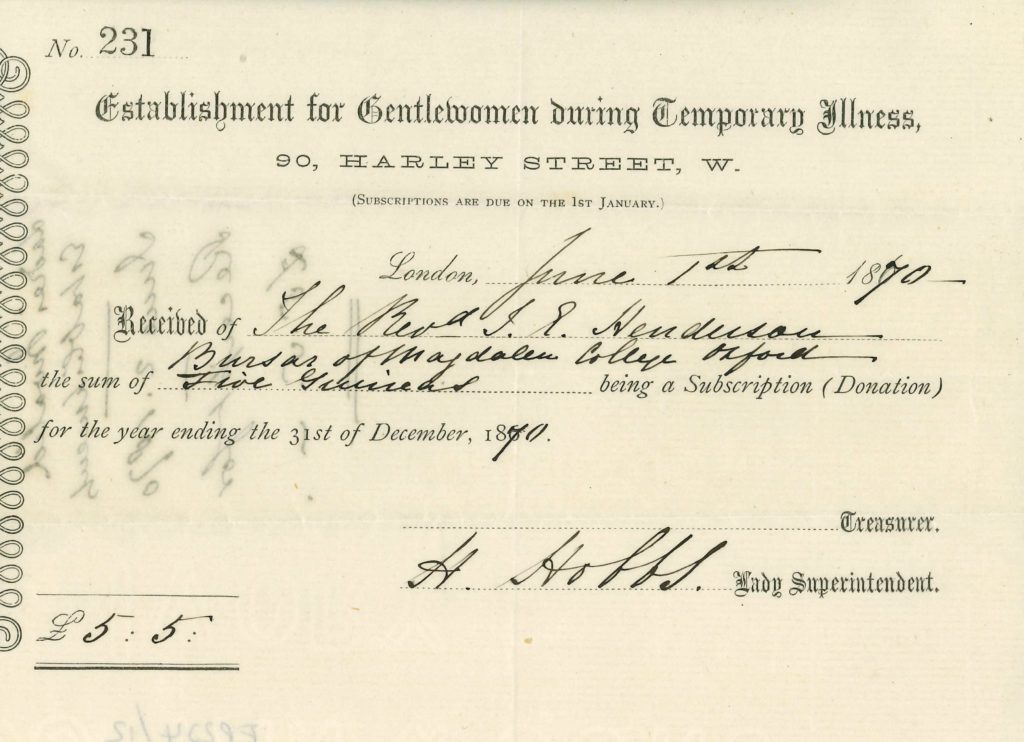 This invoice (pictured above) shows 5 guineas (£5.5.0 then or £300 today) being paid via the Sheppard Fund by the College Bursar. Many wealthy women like Sophia subscribed to a wide range of worthy causes such as this. Charity work was a frequent preoccupation for the comfortably well off and educated 19th century lady who had few other career choices at this time.

On her death, Sophia aided Magdalen a final time by bequeathing a small estate called Burntwood Farm in Wandsworth to the College in 1848. This was a valuable piece of land located in Surrey which the College divided up and developed as Victorian housing. This printed map from 1899 (click to enlarge) shows the extent of Sophia’s gift. If you look at the bottom right of the map, you can see new street names named after Magdalen figures, such as President Routh and Bursar Henderson. Much of the housing estate had not yet been built, but today the entire area is heavily built up and forms a very desirable residential area of London.

The College took rents from these properties, so Sophia’s gift helped to secure Magdalen’s financial independence. This Estates Ledger from 1900 shows a page for the Wandsworth properties, indicating the names of the tenants and the rents due.

Estates Ledger from 1900 for the Wandsworth properties. MCA CP8/2

Although often overlooked, a closer look through the College Archives reveals that several women made a lasting impact on the history of the college. Through their support, Lady Joan Danvers, Lady Alicia Lovell, and Sophia Sheppard all ensured that the College could both achieve and maintain its financial independence. On the next page, we move from women’s actions to their perception of the college. What did they think when they visited Magdalen’s ‘dreaming spires’?