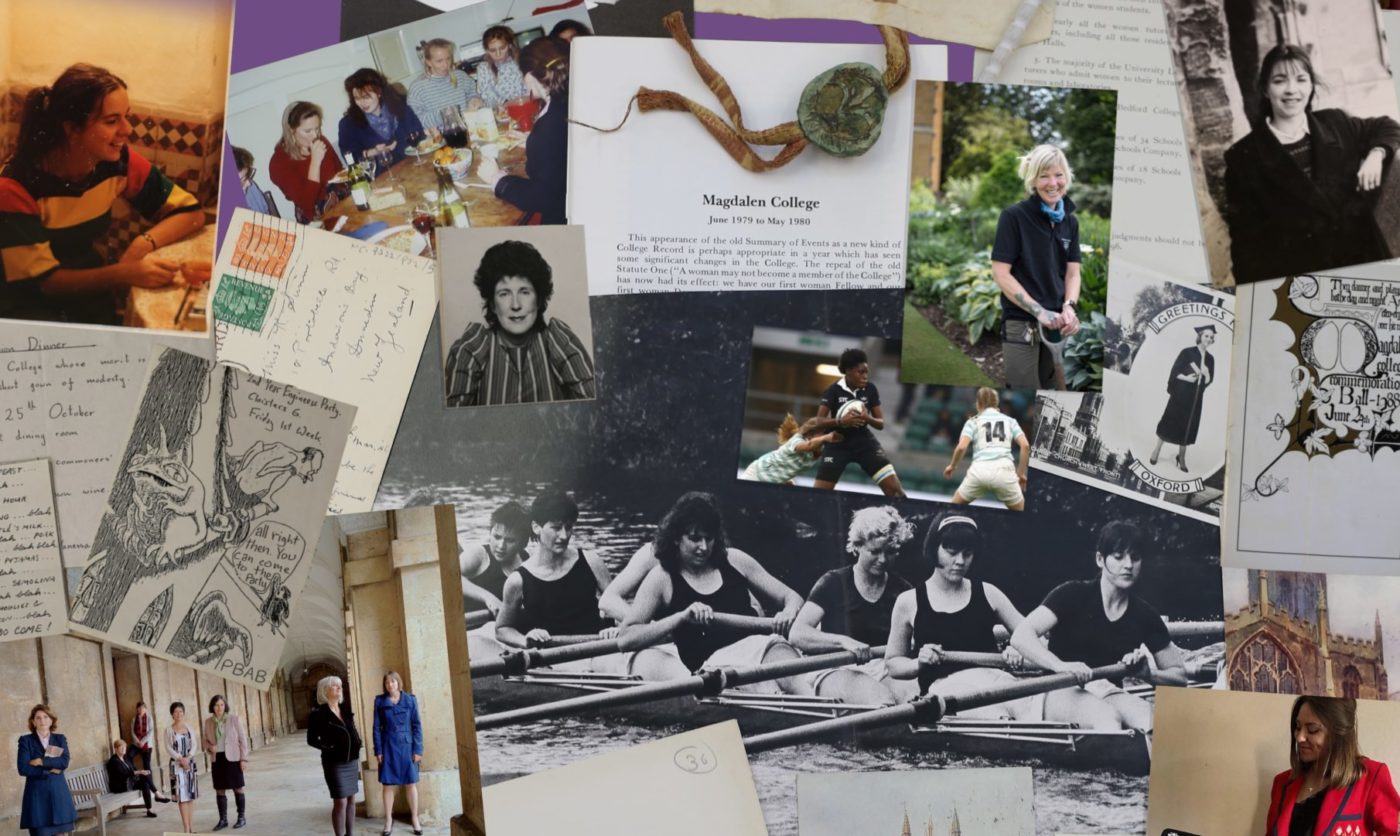 The College’s late 15th century statutes set out the rules and regulations of Magdalen, which was a heavily male-centric institution.

Despite this, College life was not entirely isolated from the world outside. A small female community lived within the College walls during the Civil War in the 17th century. Women were also regular visitors, particularly when the Picturesque Movement and Romanticism developed in the late 18th-early 19th centuries, sparking a fashion for visiting scenic sites of historical interest. In 1865, the English poet Matthew Arnold (1822-1888) coined the famous phrase ‘dreaming spires’ to describe the beauty of Oxford’s architecture. On this page, we’ll step through time to discover more about the lives of female visitors to Magdalen throughout the centuries. 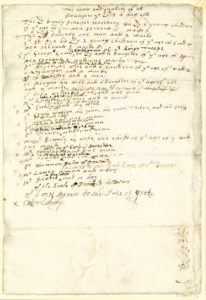 List of all ‘straingers’ living in Magdalen during the Civil War. MCA CS40/9/3

The first stop on our trip through history is the English Civil War. War between the Royalists and the Roundheads (Republicans) broke out in 1642 in England. King Charles I made Oxford his headquarters. Some of the King’s courtiers and their attendants moved to Magdalen with their wives, children, and female domestic servants. A few College fellows brought their own relations inside the walls. The resident male College fellows and students found themselves sharing their space with women and children. To the right (click to enlarge, or see the transcript), you can see a list of the ‘names and quality of all straingers that Lodge in Magdalen College’. It includes Lord Digby (the Earl of Bristol), his Lady, two children, 15 male servants, and four (female) maids.

From the horrors of war, we move to the beginnings of tourism in the late 18th century. Women were frequent visitors to College – the grounds and buildings have always attracted tourists as they do today. John Buckler was an Oxford-based artist and architect who drew several views of Magdalen like this engraving from 1799, taken from the viewpoint of St John’s Quad looking eastwards: 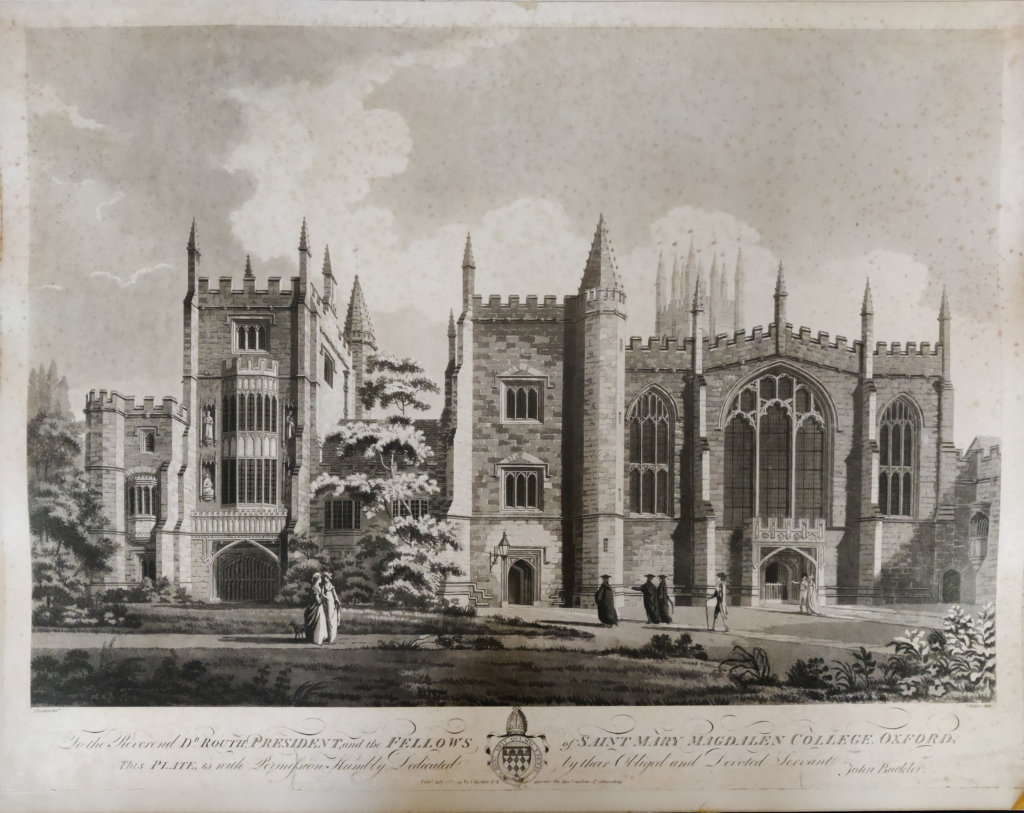 The inscription reads as follows:

To the Reverend Dr. Routh, President, and the Fellows of Saint Mary Magdalen College, Oxford, this Plate is with Permission Humbly Dedicated by the Obliged and Devoted Servant John Buckler”. 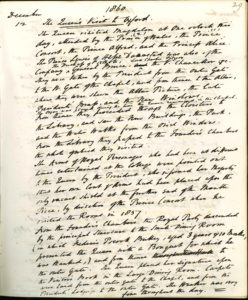 As a result of the College’s beauty, royalty also often visited Magdalen: British and international royalty studied here, such as the Prince of Wales (later Edward VIII). Queen Victoria visited Magdalen on 12 Dec 1860 and the College President, Frederick Bulley, recorded the itinerary in his personal record of College’s events (see picture on the right, click to enlarge or see the transcript).

The Queen was accompanied by her husband Prince Albert, her son the Prince of Wales, two other children, and a number of attendants. The royal party visited the College Chapel, Cloisters, Old Library, and the Founder’s Chambers. Bulley’s young son Frederick presented the Queen with a bouquet of flowers. The Queen also signed the official College visitor’s book created for the occasion which survives in the College’s archive today.

One unusual tradition at Magdalen is the weighing of visitors who come to College’s Senior Common Room, the recreational space of the College’s fellows. A stool with a built-in scale is still kept here today. Several volumes record the names of the host fellow and visitor(s), along with their weights. 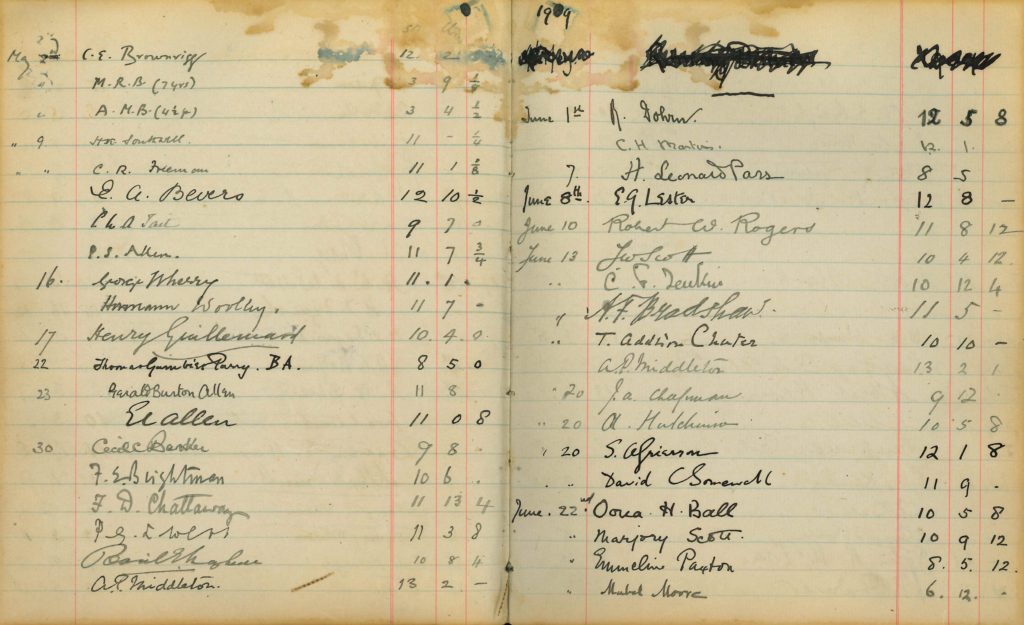 Page from the Weight Book for 1909, recording female visitors on the bottom right. MCA O1/A11/1

The first women recorded in the Weight Book (which started in 1899) appear in June 1909. Oona Ball, Marjory Scott, Emmeline Paton, and Mabel Moore are listed at the bottom of the page. Was Mabel Moore a girl or a petite woman? On the next page, their male escorts are given – chemistry Fellow T S Moore, former students J E B Hotson and F N D Masters, baby Scott (weighing 14lbs 10 oz), and visitor F E Brightman. 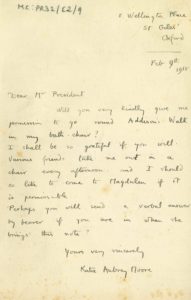 In the early 20th century, the extensive grounds, level river walks, and scenic location of Magdalen were popular with local residents who welcomed the chance for respite from the busy city streets. This letter from 1918 (click to enlarge) requests permission for Katie Aubrey Moore to ‘go round Addison’s Walk in… [her] bath-chair’. Miss K. Aubrey Moore is listed as a resident of Fyfield Road, Oxford, in 1939 but nothing is known about her Magdalen connections.

More recent perceptions of College can be gleamed from the postcard collections in the Archives. These postcards home to friends and family recorded first impressions of visits to Magdalen and other colleges. Highlights include postcards from ‘Norma’ to ‘Gladys’ in Brecon in 1934 and from ‘Maude’ to a friend in New Zealand in 1946. Former D.Phil. (Ph.D.) student, Neil Guthrie, purchases Magdalen postcards on a regular basis and kindly donates them to the College archive. Explore them in more detail in the gallery below: 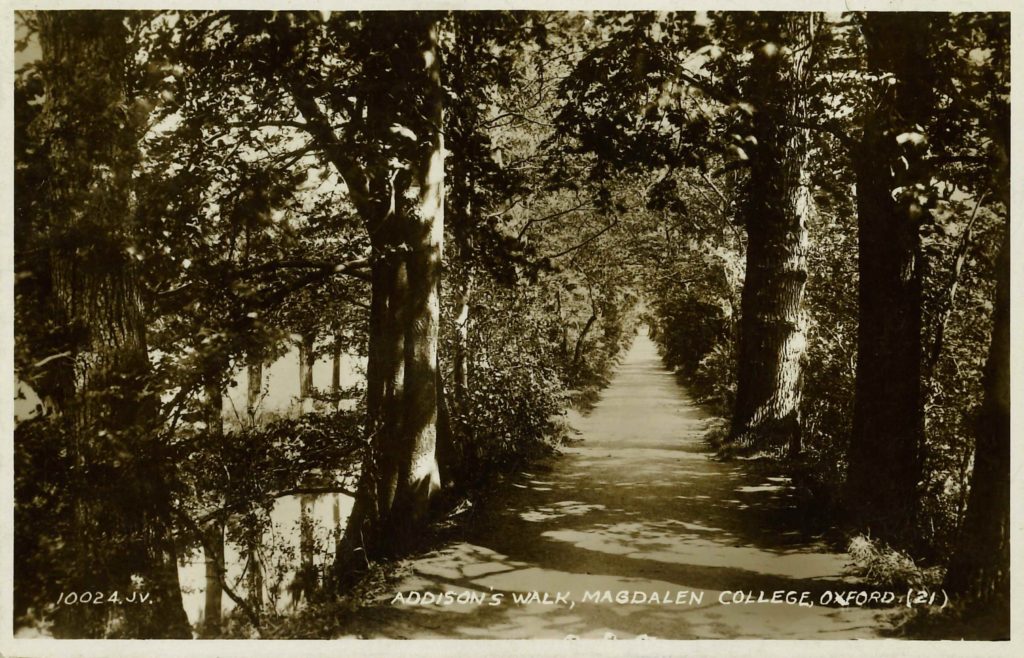 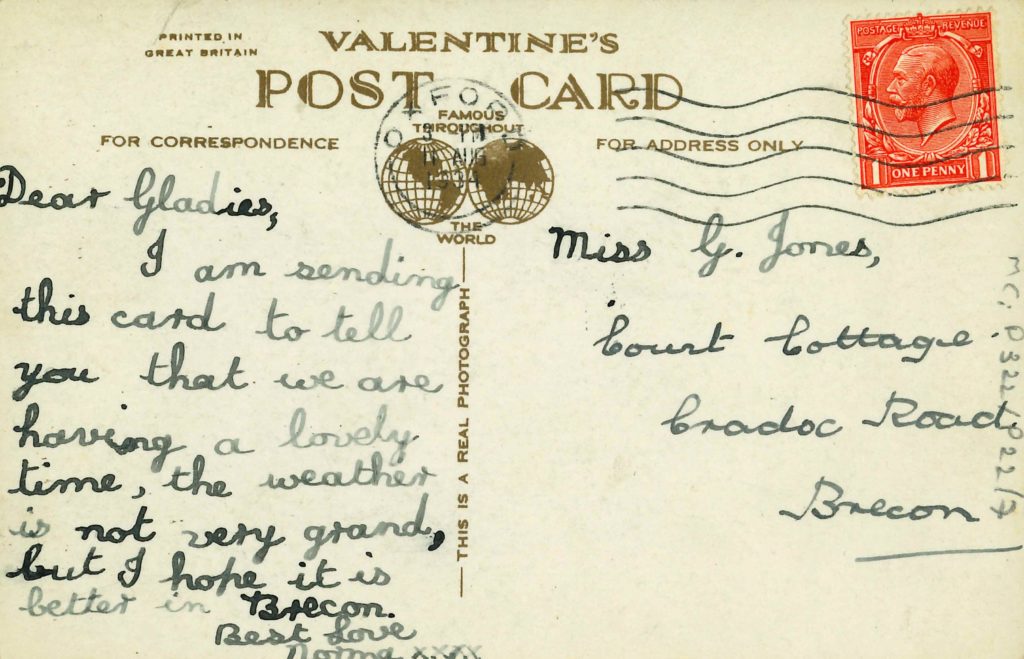 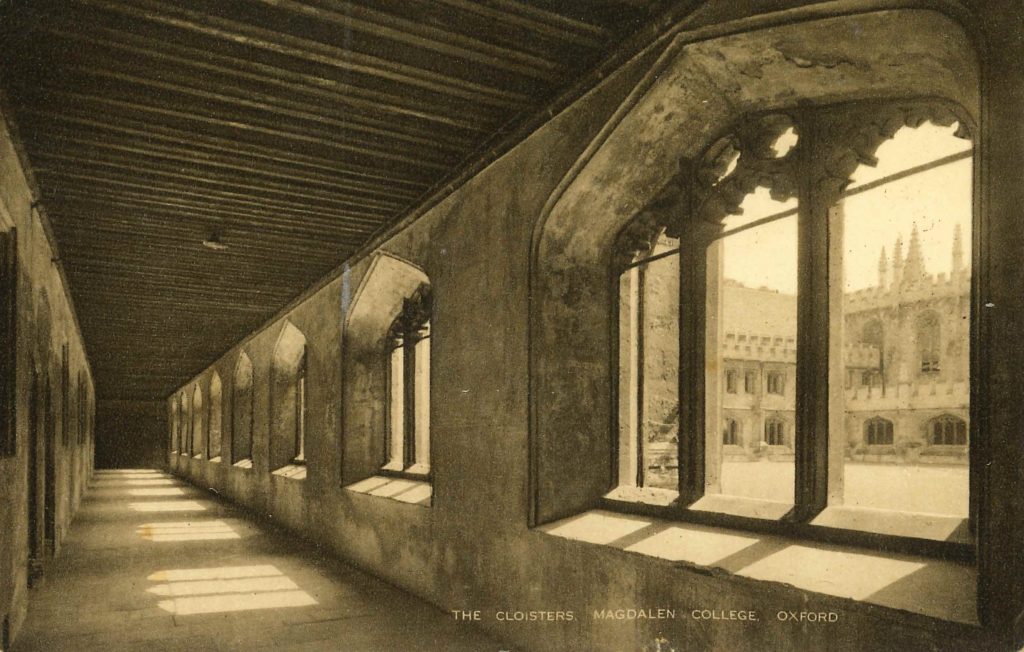 Thanks no doubt to its beauty, Magdalen has been visited by women from all echelons of society throughout its history. Although often hidden, postcards and letters in particular reveal these women’s perceptions of the College and its grounds. But what about the lives of those women that worked for the College? For much of the College’s history, their stories are much more difficult – though not impossible – to piece together.