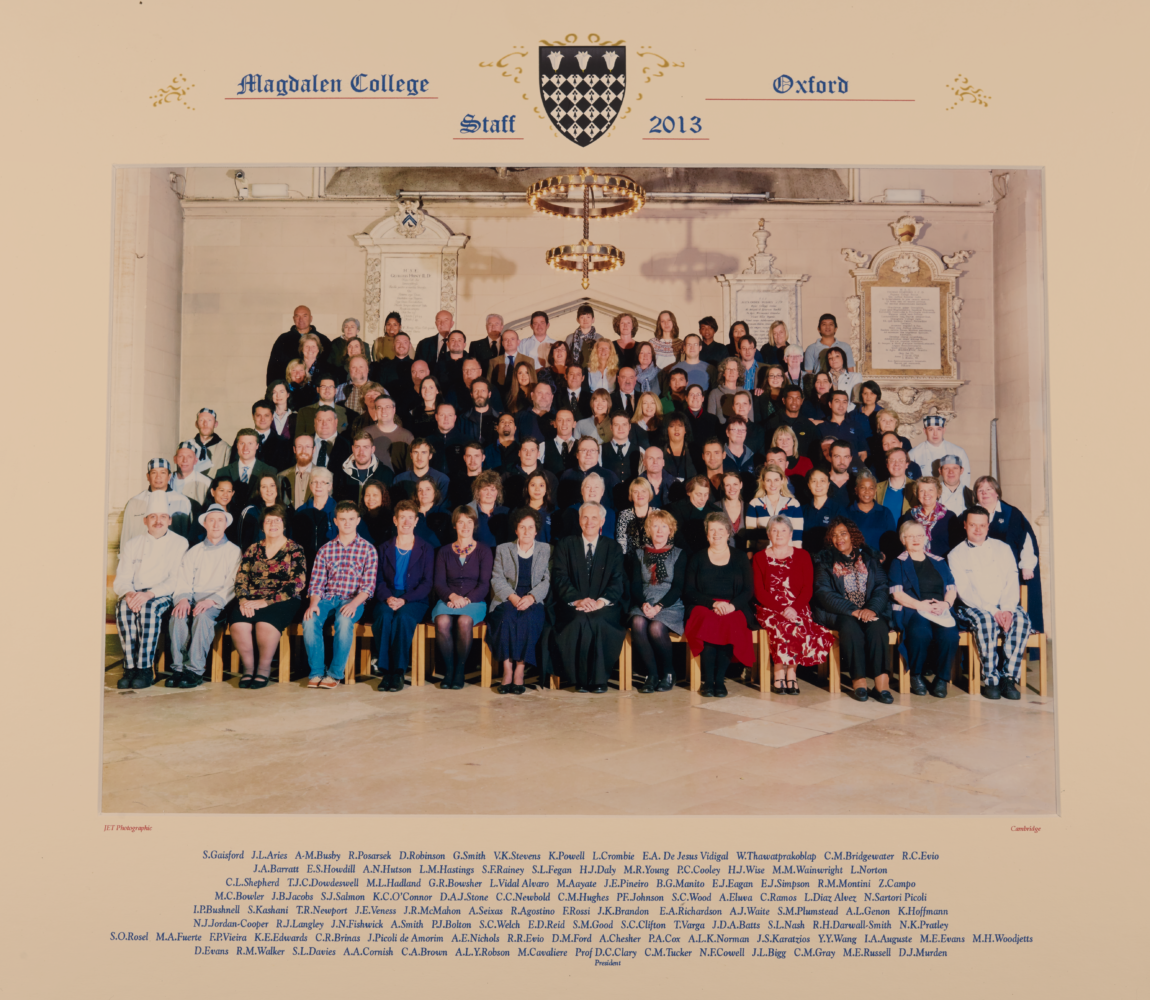 Women as Servants, Tenants, and Staff

The College’s 15th century statutes specify that all domestic work ‘be performed by Males, that all sinister suspicion be so far as may be, warily eschewed; unless haply there be a Washerwoman for the towelling and other napery…; and our will is, that she be of such age, and such condition that a sinister suspicion cannot in all likelihood light upon her’.

More research is needed into the early history of women as domestic servants within Magdalen, but the College archives show that female domestics crop up throughout the College’s long history. On this page, we show women working for Magdalen, engaging with the College in a business capacity, and using their connection with the College to support themselves financially.

A small group of College servants lived within the walls of the site. The College’s domestic staffing structure had originally been outlined in the 15th century statutes. By the 19th century, the porter and the head groom each lived on site within their own residences, together with their wives, children, and other relatives, and sometimes other college servants. Gardeners also lived across the High Street in the grounds of the Botanic Gardens, which were (and still are) owned by the College and leased to the University.

The President’s household was run as a separate unit. In the 1881 census, it was made up of a male butler and page, a female cook, lady’s maid (for the President’s wife Margaret Bulley), housemaid, and kitchenmaid. Female servants were usually unmarried or widowed. Live-in domestic service was the principal employer of working class women: this employment became less dominant only during the 20th century as free education improved and career choices widened.

There are few official records that specifically mention the lives and experiences of Magdalen’s female staff. If we look closely at the annual accounts of the College (“Libri Computi”) from 1590-1591, though, we can gain some insight: 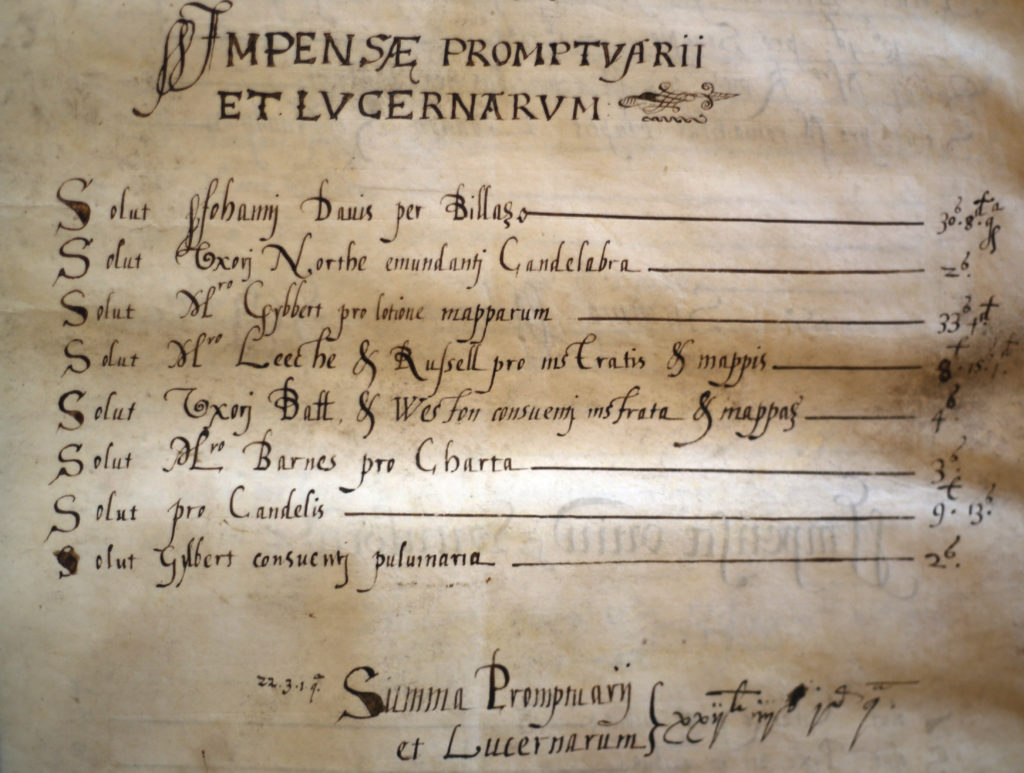 Above, detail is shown from the section on ‘Expenses for storeroom and lamps’. Three women are listed as ‘Uxori’ (‘wives’ or ‘dames’). Dame North was paid 2 shillings for cleaning out the candelabra. Dames Batt and Weston received 4 shillings (presumably 2s each) for sewing tablecloths and napkins.

More information about female employees can be found in the 19th century. The surviving Bedmakers’ Wage Book (1855-1885) and Servants’ Committee Books (1886-1940) do show that a number of women worked as charwomen (cleaners) and kitchen assistants in college from the 1850s onwards. These women were often related to existing male members of staff. 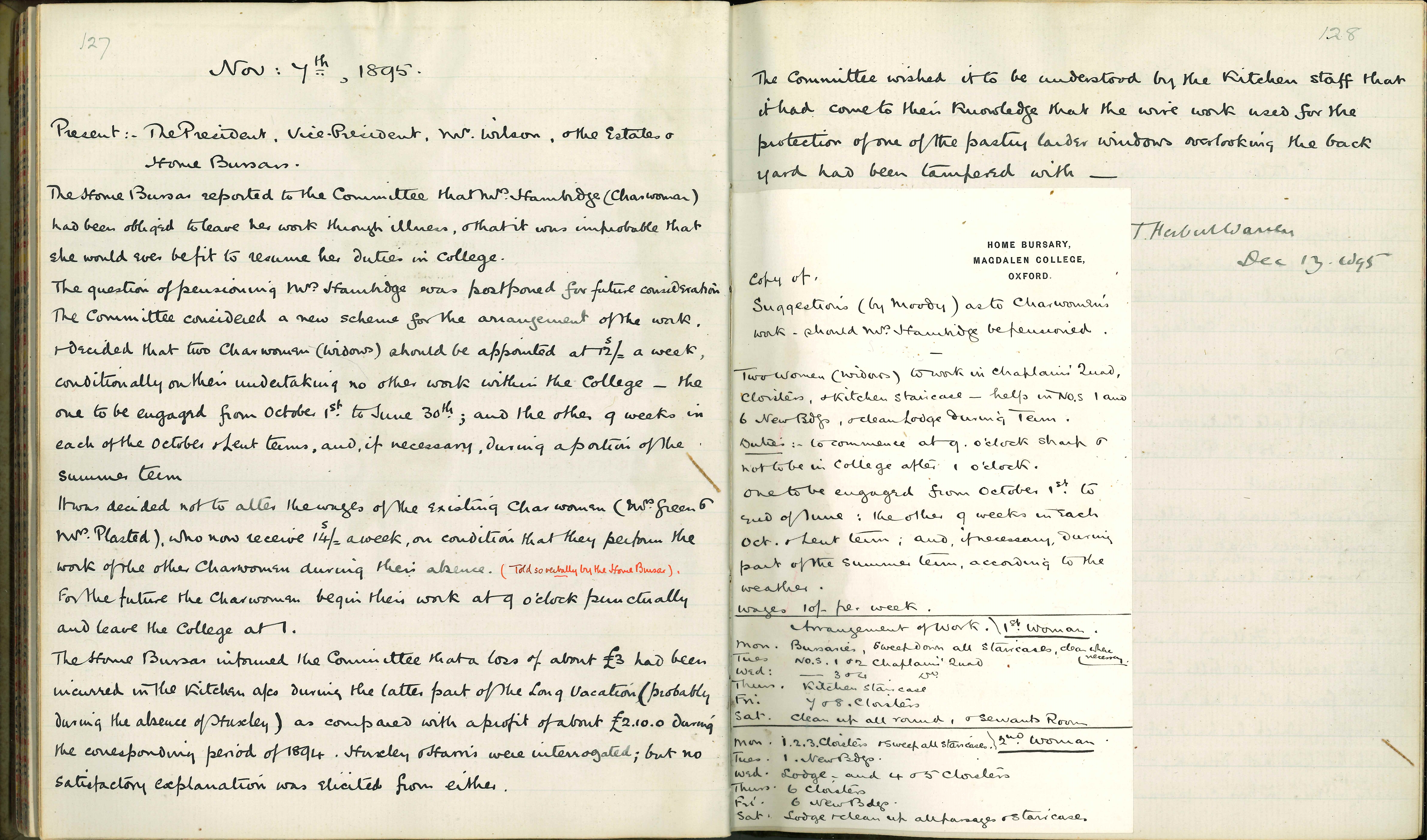 Minute from the Servants’ Committee discussing the welfare of Mrs Hambridge, 1895. MCA CP9/24/1

In this minute from the Servants’ Committee in 1895 (click to enlarge), the welfare of Mrs Hambridge is discussed – her name features regularly as the College decides how best to support her during ill health and how to ensure that her duties as a charwoman are covered by newly appointed (widowed) employees.

The College looked after its staff well compared to the average standards for the day. Pensions for permanent staff were provided and additional monetary help was available on a case by case basis when staff such as Mrs Hambridge found themselves in poor health. This benevolent approach by employers was highly necessary in an era before the later creation of the Welfare State which provided free medical care and social services. In the nineteenth century, the Victorian workhouse for the very poor within society was a feared final destination, designed as a deterrent to discourage idleness.

More detail about women’s lives can also be gleamed from letters in the College Archives. One such letter was written by Sophia Graves to the President on 23rd July 1819. In the gallery below, you can read the letter, or see the transcript: 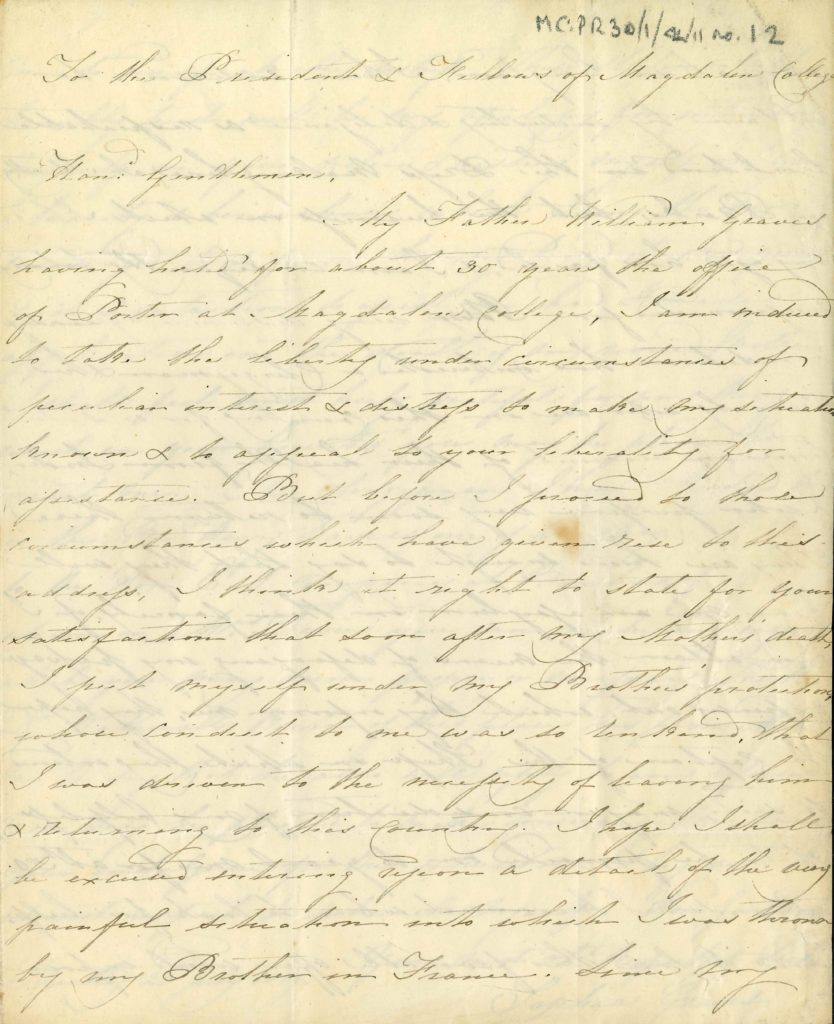 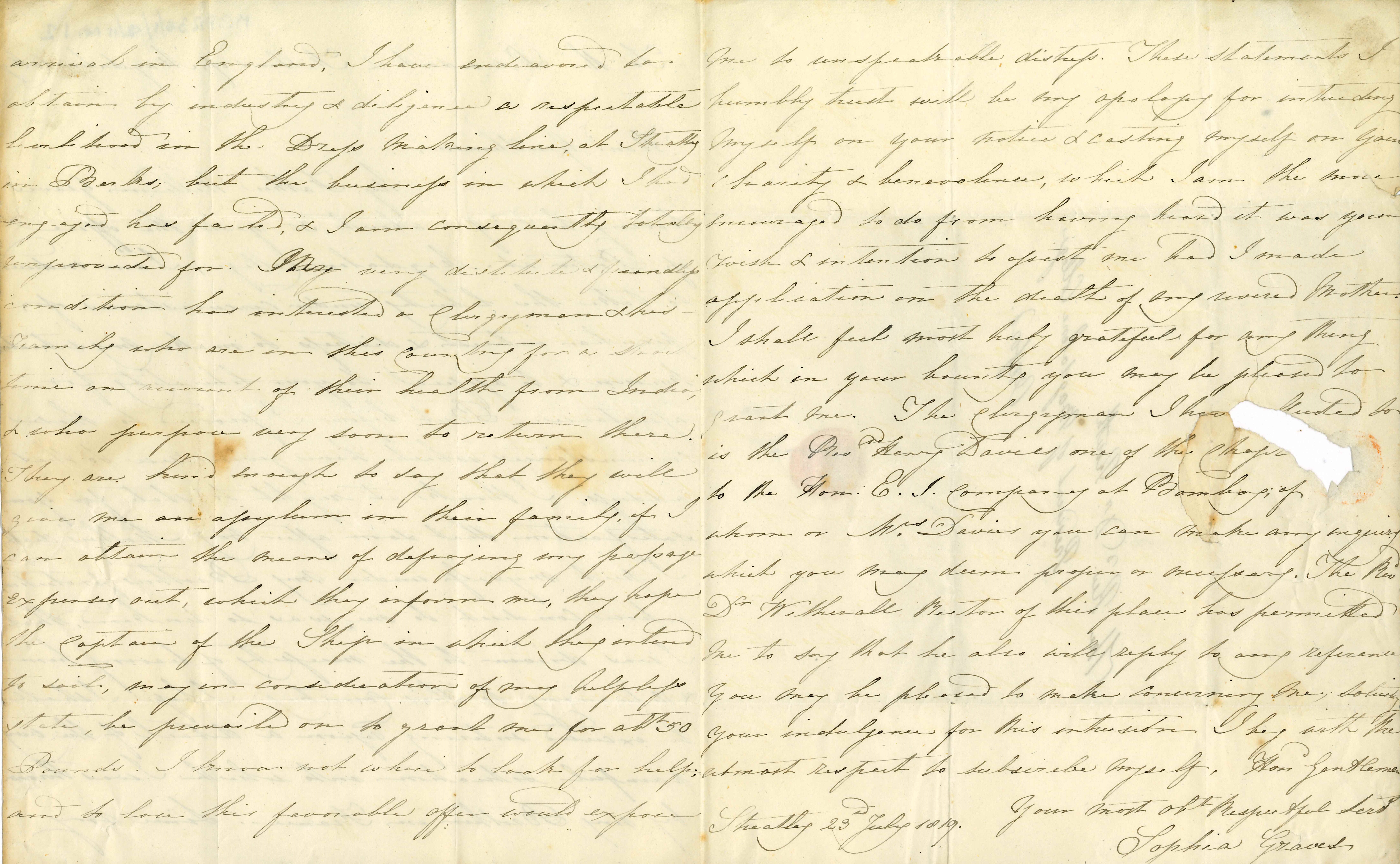 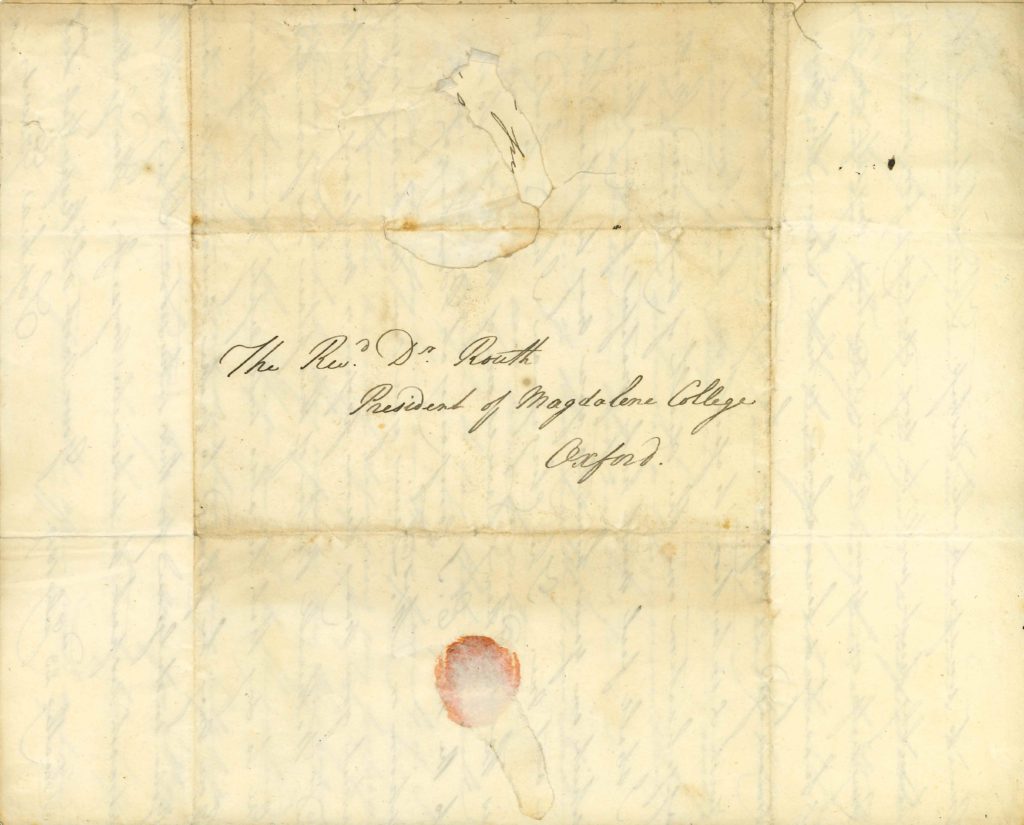 Sophia’s father, William Graves, had been porter to the College for thirty years and his family were all well known to the fellows. Sophia had found herself in difficult circumstances and a ‘very destitute & friendless condition’ after the death of her parents and the failure of her brother to help provide for her.

In this letter, she is writing to the President to ask for some advice on her prospects. She has been offered the opportunity to travel to India with a clergyman, his wife and family who she has met in France, but she needs £50 to buy her ship’s ticket. She also asks for a reference for the clergyman Reverend Henry Davies, one of the chaplains to the East India Company.

Although Sophia’s financial application was granted by the President and fellows, her plans later backfired. A letter from Magdalen fellow William Russell to President Routh in November 1820 shows that Sophia had not travelled to India at all. She returned to Berkshire, having been deserted by the Revd Davies. He had apparently examined her ‘as to her religious principles’ but found ‘she was not sufficiently spiritual in mind and that she had had no call’.

The clergyman had not paid her for dressmaking work she had done for him, and the dressmaking business she had set up in Streatley (near Goring) was now failing. Russell asks permission for the £50 for the voyage to India to be used instead to help Sophia gain employment elsewhere.

This correspondence illustrates clearly the fragile financial independence of the single woman from a modest background at this time. Sophia is well schooled and writes with an educated hand, but she has no connections save her father’s employer Magdalen College to call upon for help. 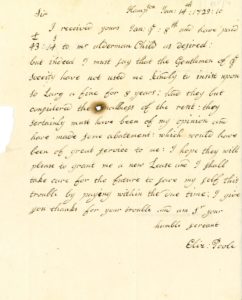 Letter from Elizabeth Poole to Magdalen College regarding her tenancy, 1729. MCA EP135/28

Women also engaged with Magdalen in a business capacity on a regular basis as tenants of the College’s numerous properties across England. Although property owners and tenants were usually male until the late 19th century, single and widowed women did have the right to administer property. This letter (pictured right, click to enlarge or see the transcript) relates to a property in Brockhampton (near Cheltenham). Tenant Elizabeth Poole is coming to the end of her lease and she objects to the large payment required for a new one as she has been late in meeting the conditions.

Elizabeth pays out £43.14.0 (over £5,000 today). Another letter from Elizabeth survives in the College archive, from the previous year. In this, she explains that her property came to her by inheritance from her father (not ‘by a Husband’). 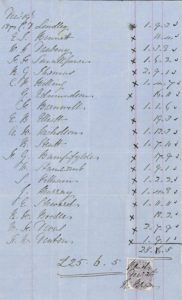 Bill from Miss Bacon to her laundry customers within College. MCA EP234/12

Women achieved equality to some degree in England and Wales when the Married Women’s Property Act was passed in 1882. As a result, married women could own, buy, and sell property in their own right.

Other women also had business relationships with the College. Most of the students and fellows ‘lived in’ at College and required a wide range of domestic support to function in daily life. Wealthier students or fellows could independently contract external female staff if necessary, who were not employed by Magdalen. This bill (click to enlarge) lists Miss Bacon’s laundry customers within College, totalling £25.6.5 (about £1,600 today).

As the 20th century progressed into the 21st century, it is clear that opportunities for women in College and across wider society only grew. Such progress can be seen if we compare the two images in the gallery below. Both are taken of College Staff, the first in c.1910 and the second in 2013. 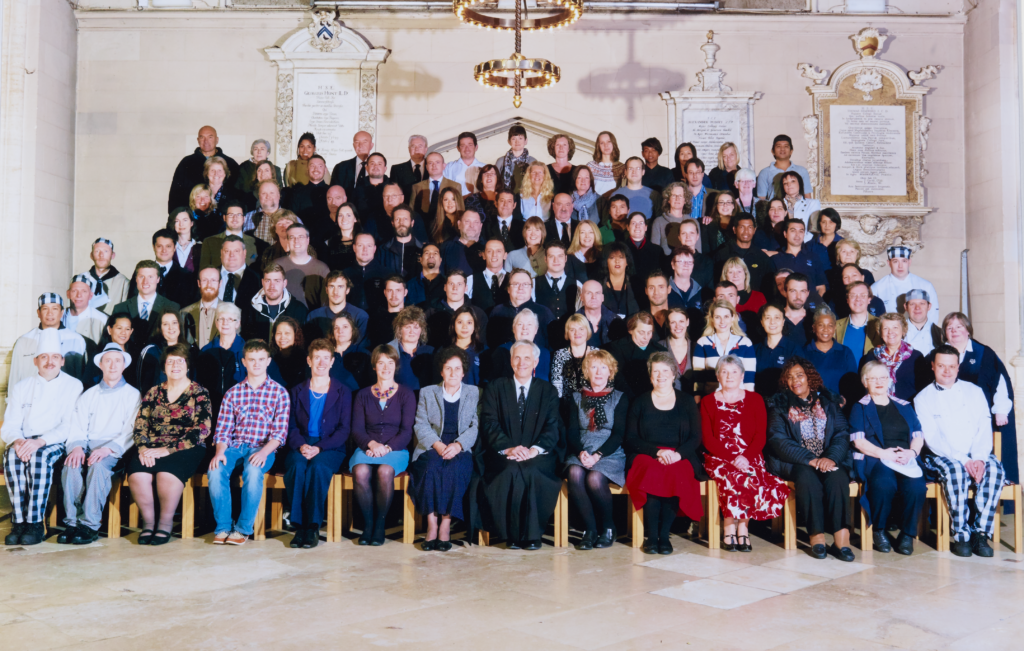 Unfortunately, not much information is available about the older picture. The date of the first photograph is not given, nor do we have the names of those pictured. We don’t know what jobs the seven women seated in the second row had within College. Spot the College cat!

It is, however, one of the earliest surviving staff photographs for the College, and it shows that female staff had a small but official presence in the early part of the 20th century. Staffing patterns were set to change considerably during and following the two World Wars of 1914-1918 and 1939-1945. In particular, ‘scouts’ (staircase attendants) eventually changed from male to female.

The second photograph is the most recent photograph taken of the College’s staff. It shows a complete transformation with many more female employees. Today, the Magdalen staff is entirely mixed in gender terms. Despite this apparent progress, though,  some traditional divisions still endure in the 21st century. Women dominate in roles such as housekeeping, administration, library, and conservation, whereas men form the majority within management, maintenance, gardening, IT, and the porter’s lodge.

On the next page, we explore how ideas about the ‘proper’ conduct of women in society impacted the relationships between men and women throughout the College’s history…

Magdalen Men and ‘Their’ Women